GP practice registers support the 3.3m figure, but the methodology and reliability of the undiagnosed figure is more uncertain.

"Diabetes UK says the number of people with the illness in the UK has reached an all-time high of 3.9 million, and estimates there are another 590,000 people with undiagnosed type-2 diabetes."

Diabetes UK's claim that 3.3 million people are diagnosed with diabetes (of either type) in the UK refers to 2013/14, and accurately quotes the sum of data from GP surgeries in England, Wales, Scotland and Northern Ireland.

The figure for undiagnosed cases is more uncertain, so the 3.9 million total figure is difficult to verify. Sky News has mistakenly double-counted the estimated undiagnosed cases, consigning an extra 590,000 people to the condition. We've asked them to correct their online article.

3.3 million diagnoses across the UK

As defined by the NHS, diabetes is "a lifelong condition that causes a person's blood sugar level to become too high" caused by an inability of the body to break down glucose into energy using insulin.

There are two main types of the condition: people diagnosed with type 1 diabetes don't have any insulin at all to carry out this process, whilst those diagnosed with (the more common) type 2 don't have enough insulin or it doesn't work effectively at breaking down the glucose.

Symptoms can only become apparent very gradually, such that diabetes can go undiagnosed for a long period of time leaving the sufferer unknowing of the cause.

We checked Diabetes UK's claim of 3.3 million people being diagnosed with diabetes (of either type) in the UK in 2013/14. The statistics for England, Wales, Scotland and Northern Ireland are published separately, but collectively sum to the figure that Diabetes UK quotes. 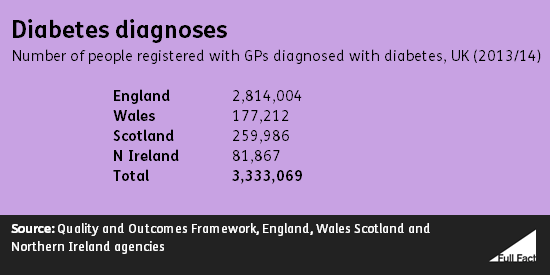 The source for the figure of 590,000 undiagnosed cases is pointed to as the Diabetes Prevalence Model, a resource from Public Health England, but is less easy to validate.

The model is now a few years old though (2012), so even the known diagnosed cases are based on forecasted figures which adds extra uncertainty into the estimates.

The survey data only comes from England as well, and the findings are applied to Scotland, Wales and Northern Ireland. There is no explanation to say whether (or why) this is a reasonable assumption other than that it's the only information they have.

We've contacted Public Health England for further clarification on their methodology of their diabetes prevalence model and when the next update is due, and await their response.

The article originally stated there were two types of diabetes. This should have said two main types, as NHS Choices states.