Where have all the (EU) nurses gone?

A new English language test has been introduced for nurses which means that some people who would otherwise have been able to practice can’t.

English language tests have been a requirement for nurses from outside of the EU since 2005. In January 2016 these were extended to include nurses from the EU/EEA. It’s been cited as one of a number of reasons, including Brexit, behind falling nursing recruitment.

There are now more nurses from the European Union going home than coming to the UK.

In the year to September 2017 the number of nurses from the EU leaving the NHS in England outweighed those joining it for the first time in at least five years. We don’t know if they left the UK or what jobs they went on to do.

“If you look at the numbers, it would appear that the big change over the last couple of years has been that we've now got European Union nurses going home rather than coming here… It would seem that part of that apparently, I can't quite believe this, was some new language test was introduced which actually did mean that some people who would otherwise have got in couldn’t get in.”

The number of nurses and health visitors from the rest of the EU leaving posts in the English NHS outweighed the number joining in the year to September 2017, the first time this had happened in at least the last five years.

Almost 2,800 nurses and health visitors, from the rest of the EU, joined the NHS and just under 4,000 left. These are headcount figures and count the number of individuals rather than full-time equivalent figures which would give an indication of the hours these staff worked. 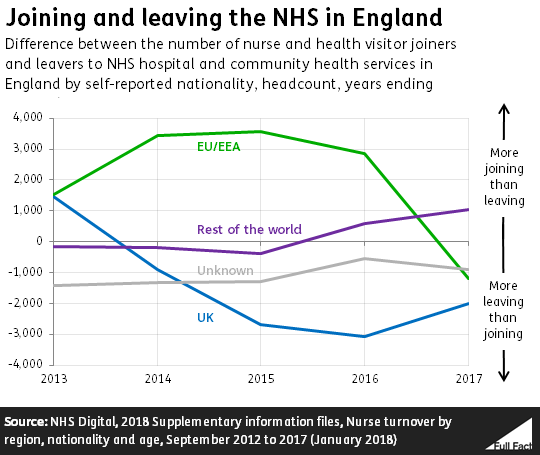 These figures don’t tell us anything about why these nurses left the NHS and we can’t say whether or not they left the UK altogether. They also include staff who may only leave temporarily, for instance those on a career break or maternity leave.

The information about where a staff member is from is self-reported—meaning that it could refer to their country of birth, their citizenship or their cultural heritage.

Around 49% of these nurses resigned voluntarily and of these about half said it was because they were ‘relocating’—although there are no details on where they went. For most of the other 51% of nurses, we don’t even know their reason for leaving.

Since January 2016 all nurses applying to the Nursing and Midwifery Council (NMC) from the EU have been required to sit an English language test. In order to practice in the UK a nurse or midwife must be registered with the NMC.

Nurses from the EU or European Economic Area (EEA) must have reached a certain score in the required English language tests to register with the NMC, this can be either the International English Language Test System (IELTS) or the Occupational English Test (OET).

Alternatively they can register if their nursing qualification was undertaken and examined in English or they have worked for at least one year in a country where English is the first language and were assessed on their English there. These alternative options and the OET test were introduced in November last year.

The same English language requirements must also be provided by nurses from outside the EU/EEA when they register with the NMC. Versions of these requirements have been in place since 2005.

Health think tank, the King’s Fund, cites the introduction of the new English language test as one possible reason for the sharp reduction in the number of nurses from the EU joining the NMC register, along with the result of the EU referendum in 2016. It says “This fall is not driven solely by the vote itself (new English language requirements were also introduced in 2016 for example), but just as with the Francis report, the timing is hard to ignore.”

The Royal College of Nursing has said that evidence suggests “the challenge facing international recruitment in the UK stems in part from a weakening of the overall EEA supply, which is being driven by complex factors including Brexit, worsening conditions for the UK nursing workforce as well as improved economic prospects in the EEA. While IELTS may not be helping this situation, it is unlikely to be the root cause.”

We corrected this article to clarify that it related to the NHS in England.