Over half of Britons would ignore Christmas Covid rules.

There is no good evidence for this. It comes from a poll on the Express website, which does not represent the views of British people as a whole.

In fact, this figure comes from a survey on the Express website, so it only tells us about the opinions of the people who responded to that survey—not the country as a whole.

After we contacted the Express during the research for this article, the word “Britons” was replaced with “readers” in the headline online. 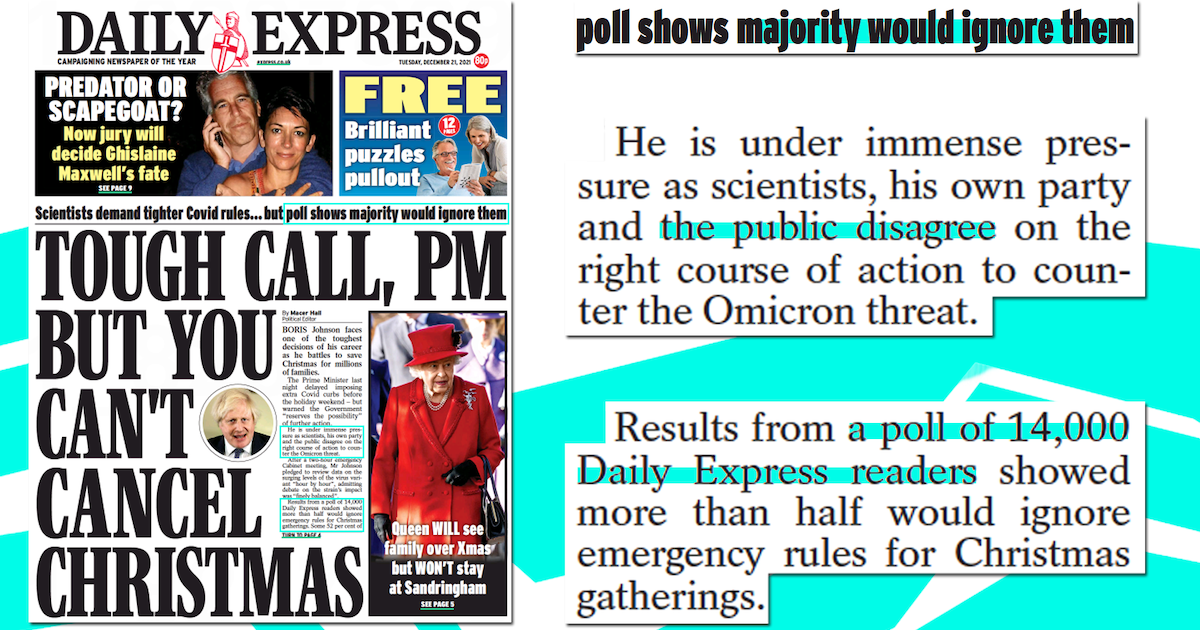 The survey was posted on 19 December. Looking back at the page with the Internet Archive, it appears to have asked: “Would you follow or ignore emergency lockdown rules this Christmas?” It gave respondents three possible answers: “Follow”, “Ignore” and “Depends what the rules are”.

According to the Express, 52% of respondents said they would ignore the rules, 31% said they would follow them, and 17% said it would depend on which rules were put in place.

This doesn’t mean anything about the views of British people, however, because those who came across the survey and decided to respond to it may well not be typical of the UK population.  The Express has confirmed to us that these numbers were not weighted to make them more representative.

We’ve not been able to find an authoritative poll showing how the public expect they would respond to a Christmas lockdown.

An Ipsos MORI poll conducted between 16 and 18 December found that 44% of British people thought that the current Covid restrictions did not go far enough.

A poll for the Times conducted on 14 and 15 December found that 37% of people in Great Britain also did not think the government had imposed enough restrictions. However, a majority opposed each of the new restrictions suggested to them, such as a ban on meeting other households indoors at Christmas.

In research from 9 to10 December, YouGov found that most people in England were wearing masks in shops, and that the proportion had risen substantially since this was made a rule in England.

YouGov polling from 30 November to 1 December also found that the English public was opposed to more restrictions such as closing pubs and restaurants, but in favour of others like closing nightclubs. The Omicron outbreak was much smaller at the time.

After we published this fact check, we contacted the Daily Express to request a correction regarding this claim.