This map in the Daily Express uses all the wrong numbers

There were no new daily Covid-19 cases reported in several UK nations and regions on April 29.

This is not true. Every nation and region listed on the map reported many Covid cases on that day. 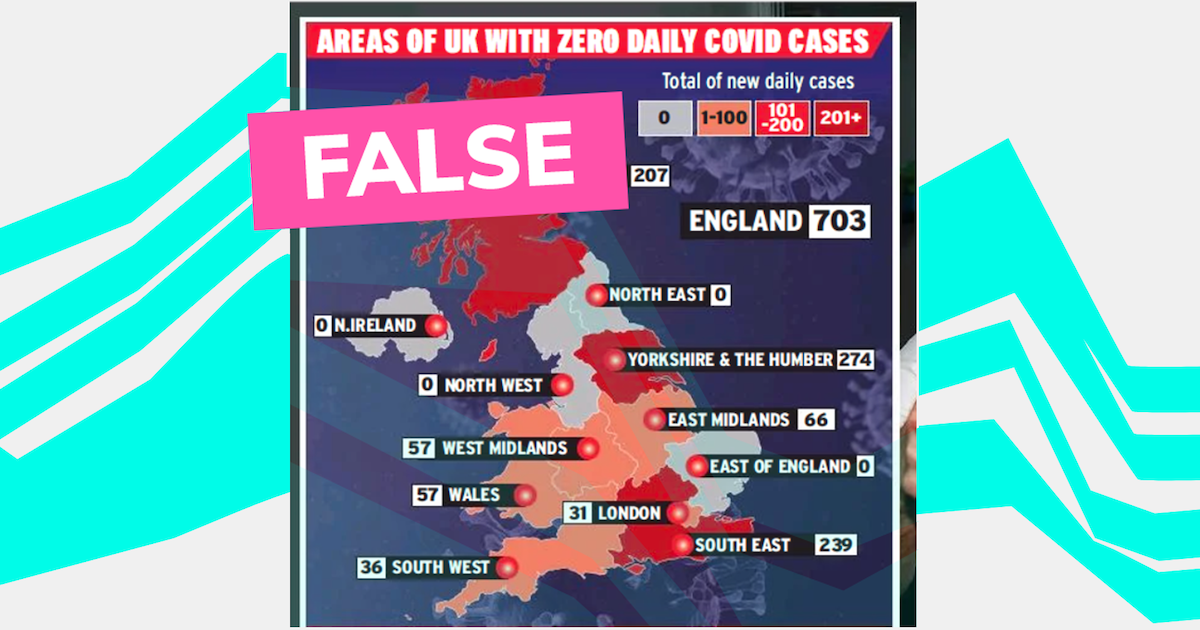 A map in the print version of the Daily Express on 30 April gave a very misleading impression of the current state of the pandemic in the UK. The Express subsequently published a correction, in response to this article.

The map claimed to show the number of new Covid cases in each nation and region of the UK, with several apparently showing zero cases.

In fact, all these numbers were wrong. None of these nations or regions reported zero cases of Covid on 29 April, or on any other recent day. Nor were any of the other case totals accurate.

It’s possible that the numbers were meant to refer to something else, but we’ve not been able to work out what. We’ve asked the Express what the map was meant to show, but we have not yet had an answer.

The map accompanied an article that cited data from the Department of Health and Social Care that was analysed by the Press Association.

However, Full Fact contacted the Press Association, which told us that it did not produce this chart, and does not recognise the information in it.

The latest figures available when the map was published were the ones reported on 29 April. A map of the real Covid numbers from 29 April would look quite different.

This is probably not the best way to look at the number of Covid cases that are being found in different parts of the country, however, since case numbers fluctuate from day to day, and some regions have more people living in them.

A more meaningful map would show the number of cases detected per 100,000 people in a whole week.

A similar map is updated regularly on the Coronavirus dashboard.

This article was updated to say that the Express published a correction.