Surprisingly few people have died of flu or pneumonia in 2020 so far.

2020’s flu and pneumonia death figures are low, but this post makes the fall seem much more extreme than it is, by comparing this year with the worst on record.

A widely shared post on Facebook compares the number of deaths from diseases categorised as “flu & pneumonia” (which in practice means deaths from flu or pneumonia) in the first eight months of five different years.

It shows that far fewer people have died of these diseases so far this year, compared with 1976, 1982, 1997 or 2000. “Does anyone else find this just a little bit odd?” the post says, which some readers may understand to imply that tens of thousands of flu and pneumonia deaths are being wrongly recorded as deaths from Covid-19. (This is a common misunderstanding.)

In fact, this post is a perfect example of what’s sometimes called “cherry-picking”—choosing unusual examples to suit an argument, but hiding the whole picture.

What is wrong with the numbers?

The figures themselves are accurate. They come from data for England and Wales published by the Office for National Statistics (ONS) on 8 October 2020. What’s odd is the choice of years to look at.

As you can see from the graph below, there have been relatively few deaths from flu or pneumonia in the first eight months of 2020. It’s the lowest figure in recent decades, but not outlandishly low, when compared with the number of people dying in the same period of recent years. 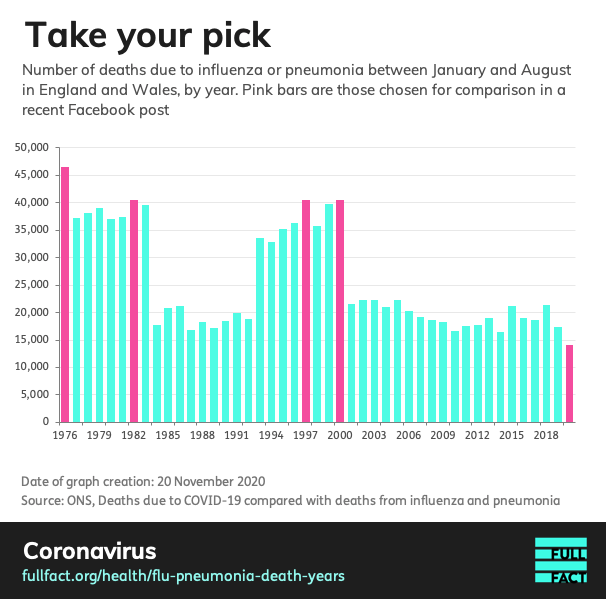 Indeed, evidence from countries in the southern hemisphere (during what would typically be their winter flu season) suggests that this is exactly what happened, as there were significantly fewer flu infections than normal.

If deaths from flu or pneumonia in the first eight months of 2020 had been similar to the numbers recorded in the four highlighted years, that would have been more surprising.

This article is part of our work fact checking potentially false pictures, videos and stories on Facebook. You can read more about this—and find out how to report Facebook content—here. For the purposes of that scheme, we’ve rated this claim as missing context because it does not include figures from recent years, which show a much smaller fall in 2020.