GP numbers: up or down?

Correct looking at the headcount of GPs (excluding locums) in England between September 2015 and 2018. Looking at the full-time equivalent number of this group, which gives a better idea of staffing levels, the numbers are falling.

GP numbers are experiencing their first sustained fall for 50 years.

Correct, looking at the number of GPs (excluding registrars, retainers and locums) per 100,000 people across the UK since 1964.

“Today, we learned that GP numbers are experiencing their first sustained fall for 50 years.”

“There are actually more GPs in the NHS today than there were in 2015.”

Theresa May and Jeremy Corbyn clashed at Prime Minister’s Questions over the number of GPs in the NHS. Both were correctly quoting their selected figures, but the problem was they were talking about two different measures.

Mr Corbyn was referring to the findings of a new report by the Nuffield Trust think tank. It found that the number of fully qualified, permanent GPs across the UK, per 100,000 people, “has fallen in a sustained way for the first time since the 1960s.” The same trend is true just when looking at England in isolation.

Mrs May was referring to the total number of GPs in England excluding locums. This figure went up by around 200 between September 2015 and 2018.

Both are using “headcounts” of GPs, and these figures don’t tell us anything about how many hours these GPs are working. There’s no way to account for this in Mr Corbyn’s figures as the data is limited, but it’s possible to account for this in the data Mrs May was using. Looked at this way it paints the opposite picture. The number of “full-time equivalent” GPs excluding locums fell by 330 over the same time period.

Health is a devolved issue so the UK government is only responsible for services in England.

The number of GPs per person in the UK is falling 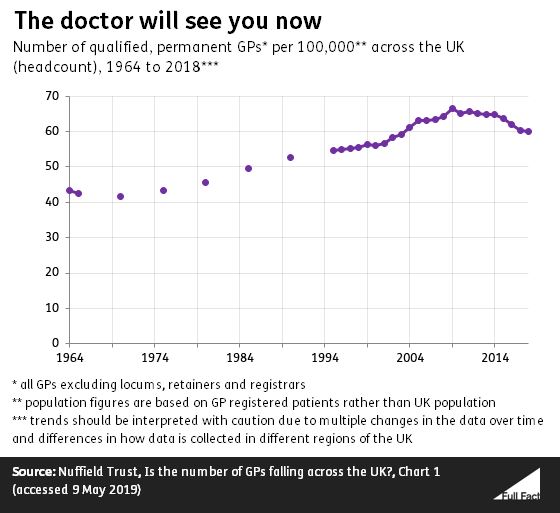 The figures exclude certain types of GPs: registrars (GPs in training), retainers (those on schemes to support people with a caring responsibility), and locums (GPs providing temporary cover).

It also says the trends should be interpreted with some caution due to the fact that there are some data quality issues, figures from across the UK are not necessarily taken at the same time in every year, and the fact that in some years estimates had to be made as to the number of GPs in a small proportion of practices that didn’t report their staffing levels. There are also problems with the changing definitions of who is included in the figures over time which mean we should be cautious about comparisons.

The trend is the same in England, but not in every part of the UK. 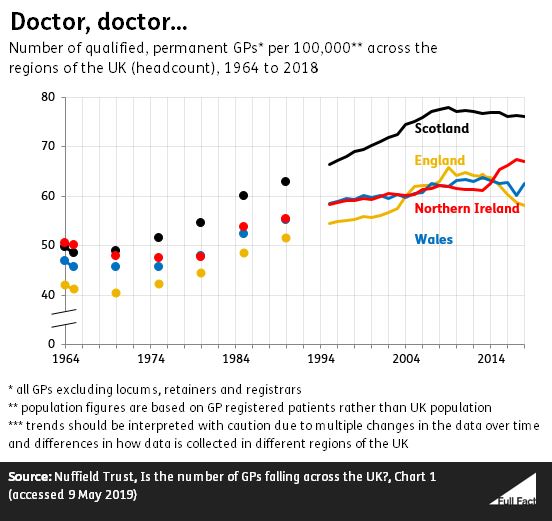 The Department of Health and Social Care told us that Mrs May was referring to the headcount number of permanent GPs (all GPs excluding locums) in England. The number rose by 208 between September 2015 and September 2018 (the most recent comparable figures). That’s an increase of about half a percent. 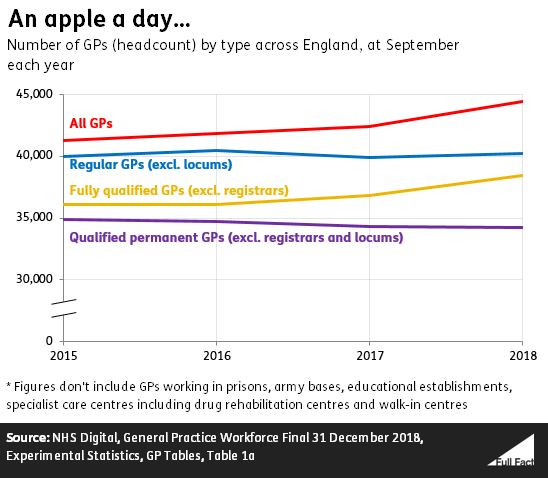 Looking just at the headcount figure, or the total number of people employed in a role, doesn’t tell us much about the working capacity those people have. To do this we can look at the number of hours they all work and add these together to work out how many full-time roles they make up, known as the full-time equivalent (FTE).

The number of FTE permanent GPs (the equivalent FTE measure of the type of GPs that Theresa May was counting), the number fell by 330 between September 2015 and 2018. Looking at all FTE GPs the number rose by 270 and excluding registrars and locums it fell by around 1,180. 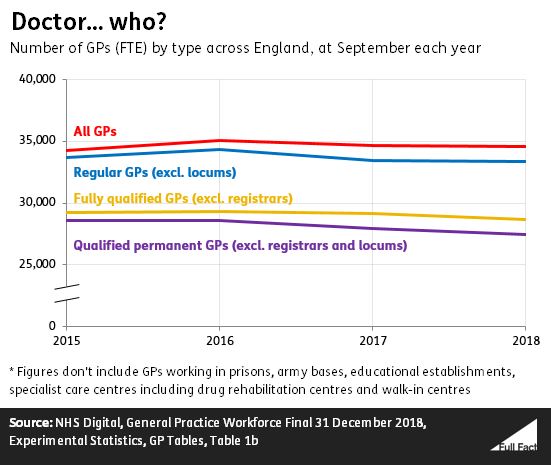 The data the Nuffield Trust based their report on only provides headcount figures, rather than FTE, as not all of the regions of the UK regularly publish data on FTE GPs.