"More than 14 million patients were forced to wait over a week for a GP appointment in the past year, damning figures reveal."—Daily Mail, 3 July 2015

Today's figures can't tell us how many GP patients in England were forced to wait a week or more, as we've said previously about an earlier version of the same survey. The figures tell us that 26% of patients waited over a week or failed to get an appointment last time they tried—but many of those people will have been happy to wait a week. So it's not right to say, as the Daily Mail does, that these people are all "forced" to wait over a week.

The 14 million figure is calculated by applying the 26% figure found in the survey to the population of England, which is 54 million according to the latest estimates. We're not sure if this is a sensible comparison so we're in touch with Ipsos MORI and NHS England, who are behind the survey, to find out if their figures can be used in this way.

The latest figures on GP waiting times show that 11% of patients couldn't get an appointment at all the last time they contacted their GP surgery, while another 15% saw or spoke to someone a week or more later. To get to that figure, we and the Mail have had to do a bit of number crunching.*

It's fair to describe the 11% of patients who couldn't get an appointment as unable to see someone within a week. But many of the 15% who did wait a week may have been happy to do so, for example if they had requested a routine appointment in a fortnight's time because that was the most convenient day.

One in 14 patients 7.3% said the last time they tried to book a GP appointment they wanted one that was a week or more later. Some of these may have got an appointment sooner than a week, despite this. A further 15.4% said they didn't have a specific day in mind. We don't know how many of the 15% who waited a week or more fell into either of these two categories, so we're not able to say how many were forced to wait that long. 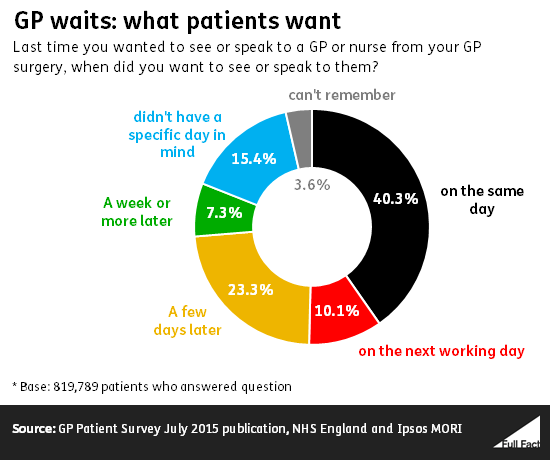 That means we can't use the survey to tell us how many individual patients are forced to wait that long.

*Of patients who tried to get an appointment to see or speak to someone at their GP surgery, 85.2% said they were successful. Of these, 17.9% said they saw or spoke to someone a week or more later. Multiplying these percentages gives us 15.3% of patients.