Has the number of teenage girls self-harming doubled?

Self-harming by teenage girls has doubled in the last 20 years.

The number of hospital admissions in England for girls under the age of 18 because of self-harm has doubled in that time. We don’t know how much of that is down to improved recording or to an actual increase in self-harm.

Not all of that increase reflects a genuine increase in self-harming, because measurement and reporting of the issue is getting better.

That was a decrease on the previous year when there were over 14,600 admissions.

Over the same time period the number of girls in England under the age of 18 has increased by just 5%.

These figures can only tell us about incidents of self-harm that result in subsequent hospital treatment, it doesn’t tell us anything about those cases that don’t make it to a hospital.

The figures were produced by NHS Digital for the Department for Health and Social Care. The Department says that “the increases shown in the data should also be interpreted in the context of improving data collection and reporting and increasing knowledge, awareness of self-harming and empowerment of people to report self-harm.”

‘Greater awareness’ of self-harm could include medical staff being better at interpreting symptoms, as well as patients knowing there is more help and support available for them, and how to access those services.

It adds that improved collection of data on the topic, and the fact that during the period NHS Digital started collecting data on admissions to private hospitals too, could account for some of the increase. 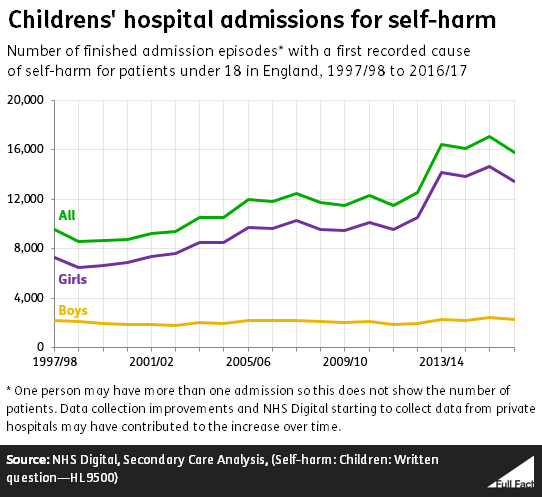 Over the same time the number of boys under 18 in the population in England increased by 5%.

A wide-ranging study of mental health conditions conducted in 2000, 2007 and 2014 found that the proportion of 16 to 74 year olds living in England who reported in an interview that they had self-harmed increased from around 2.4% to 3.8% and then increased to 6.4%.

The study found that “It is likely that this increase in reporting is due (at least in part) to changes in reporting behaviour, that minor self-injury which people had not included as self-harm in previous surveys has started to be labelled as such.” It also said that people may have felt more able to say they self-harmed n more recent surveys as the topic becomes less stigmatised. The increase may also be down to a real increase in the behaviour.

It also said “that young people who self-harmed were more likely than older people who did so to report relieving feelings of anger, tension, anxiety or depression as a reason.”

The study also found that young women were much more likely to report having self-harmed than young men, but that the variation between men and women reduced as they got older. 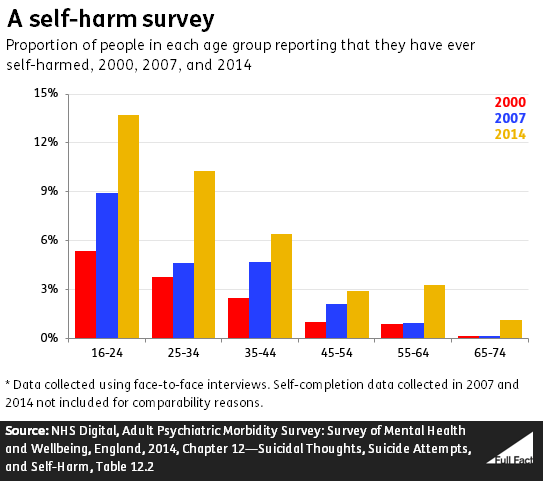 That said, the study’s authors do say that “It should be noted that this relates to self-harming and help received at any point; some younger people may go on to receive support in the future.”

The number of boys increased nearly fivefold from around 150 to 840 over the same time period.

ITV have a list of helplines if you have been affected by any of the issues raised in this article.