There has been a rise in deaths from heart disease.

The death rate from heart disease has increased for the first time in 50 years. 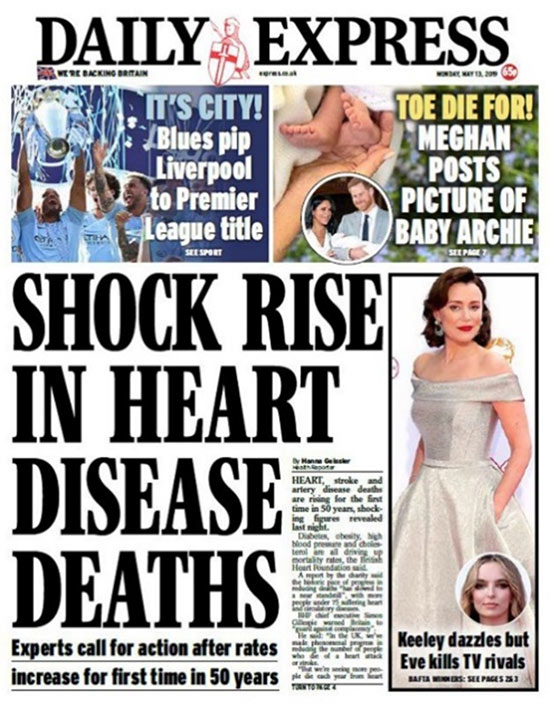 On Monday, the British Heart Foundation (BHF) reported that the number of under 75s in the UK dying of heart diseases and strokes had seen the first sustained increase in 50 years.

The story was picked up by the Daily Express and almost every other national newspaper. But what was reported didn’t quite match the facts of the report released by the BHF. And regardless, there’s only so much this data tells us.

Contrary to what most of the headlines suggest, the overall number of deaths from heart disease in the UK continues to fall, as does the rate (the number of deaths per 100,000 people, adjusted for age).

The rate at which deaths have been falling has, however, slowed down significantly in recent years.

Reporting of the story wasn’t clear

There are three key things which the Express fails to make clear.

Firstly, the headline suggests the total number of deaths from heart disease has increased, and the print article doesn’t clarify until the third   paragraph that the “rise” doesn’t refer to the whole UK population.

Similarly neither the Guardian, Independent, i nor BBC made this clear in their headline.

Secondly, this isn’t, strictly speaking, the first rise in deaths “in 50 years”. Heart disease deaths among the under 75s have actually been rising since 2014, according to the same BHF data. The BHF calls this the first “sustained” rise in 50 years as the number has increased for three consecutive years.

So 2017 isn’t the first year the number of deaths rose, as suggested in various newspapers, but they probably weren’t helped by unclear wording from the BHF.

Thirdly, and most importantly, the Express said the rate of death has increased, when it hasn’t. Whether you’re looking at under-75s or at all ages the death rate from heart disease has continued to fall (despite the total number of deaths among under 75s) increasing.

What’s more useful to look at is the age-standardised death rate, or the number of people who die from heart disease per 100,000 in the population. This figure is also adjusted to take account of the different ages of these people. For example, there are a lot more people in the UK just under the age of 75 as those born in 1947 (at the beginning of the baby boom) have reached their 70s.

Over the past 50 years the age-standardised death rate from heart disease has declined almost every year, for both the whole population, and the population aged under-75. 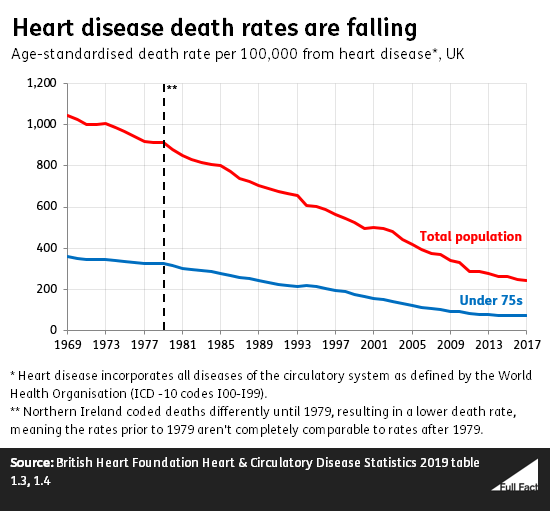 But from 2011 we’ve seen that trend slow down. The death rate continues to decrease, but it’s decreasing at a slower rate than it used to. 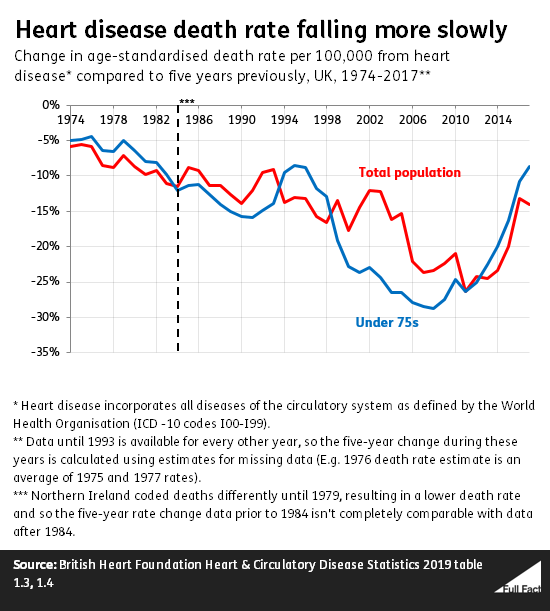 So although there’s been a slight uptick in the total number of people aged under 75 dying—which is affected by population change among other factors—there has been a “significant slowdown” in how quickly heart disease death rates are improving.

They deleted the article.