Heartache in Hertsmere: the unhappiest place in the UK?

“…residents of Hertsmere borough council… were the unhappiest in Britain in the 12 months to the end of March.”

“Overall, how happy did you feel yesterday”, the Office for National Statistics asks people every year. This year people in Hertsmere did feel least happy. However, the uncertainty of the data means that 291 of the 389 areas surveyed could be unhappier than Hertsmere.

The report warns that “Simply ranking local authorities by their numerical scores can be misleading”. This is because the survey cannot pick up on small differences between local authorities.

Only 100 people in Hertsmere were surveyed between April 2016 and March 2017, making it hard to be confident their responses represent how their fellow Hertsmere residents would rate their happiness too. So the ONS gives a range of values—confidence intervals—for what the average happiness in Hertsmere might be.

To put this in perspective, the happiness rating of a further 291 out of 389 local authorities could fall within these ranges. 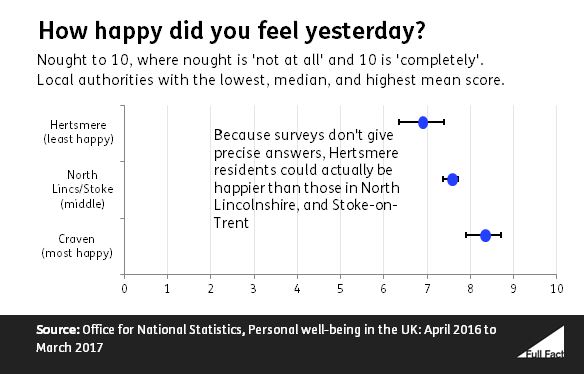 Instead of simply comparing scores between different local authorities, the ONS suggests that “(t)he most appropriate comparisons are progress over time within the same local authority, or across local authorities that share a similar demographic composition to one another.”

This could be a mixed blessing for the residents of Hertsmere, as there hasn’t been any significant change in their reported happiness levels in the past five years.

Nonetheless, residents of Craven will be happy to hear (as if they weren’t already) that they are reportedly the happiest place in the UK this year, if we go by average score. Their score of 8.30 pipped the Orkney Islands (8.24) and Mid Suffolk (8.18) to the top spot. However, any of 157 other local authorities could statistically be the happiest this year too, based on these ratings.

You can find out how happy your area is via the ONS release.