How many deaths from this summer’s heatwave?

Deaths rose by 650 above average during the UK heatwave

Correct, for 23 June to 13 July this year in England and Wales. The increase has been higher in previous years, and we won’t have a full picture until better statistics come out later in the year. High temperatures have been linked to more deaths in the past.

It’s too early to tell what the impact of this summer’s hot weather has been on mortality rates, although abnormally high temperatures have been linked to an increased number of deaths in the past.

The Guardian notes that during three extremely warm weeks spanning June and July this year, there were 663 more deaths in England and Wales than the average for the corresponding weeks over the previous five years. Yet this increase is not especially unusual. If we look at those same three weeks in 2017, there was an even higher number of deaths compared to the five-year average, despite temperatures being lower.

A key problem is that the data on weekly deaths is based on the date deaths were registered, and only 61% of deaths were registered within five days in 2016 (the most recent figure we have). We’ll get a much better impression of mortality rates later in the year, when the ONS publishes more detailed information.

What do the figures show?

The Guardian looked at data for the number of deaths recorded in England and Wales in a three-week period from 23 June to 13 July this year. It says that these weeks saw a run of 15 consecutive days (from 25 June to 9 July) where the temperature was above 28 degrees, according to the Met Office. The actual definition of a “heatwave” is quite technical, but it’s fair to say that temperatures were unusually high in this period.

According to data from the Office for National Statistics (ONS), there were just under 28,000 deaths registered in England and Wales from 23 June to 13 July this year. That’s 663 more deaths than the average for the same weeks over the previous five years.

However, such an increase is not so out of place when you look at the wider picture. There was in fact a bigger spike in deaths in the corresponding weeks of the year before: there were almost 1,200 more deaths in 2017 than the average for the previous five years. We don’t know the exact temperatures on those days, but the June-July period was cooler on average last year than this year, and described as “unsettled”.

Put another way, the number of deaths was 4% above the five-year average for those three weeks in 2017, compared to 2% above the average this year. 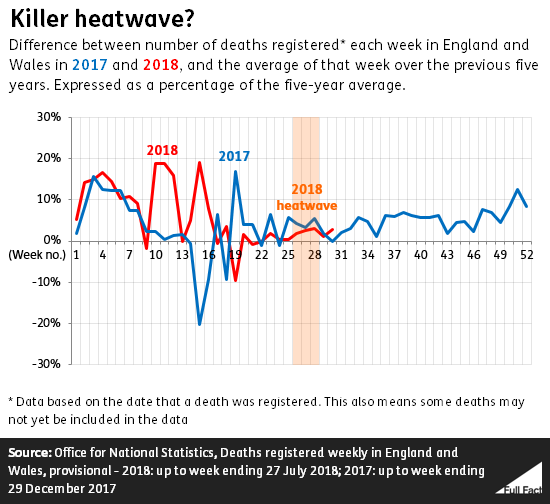 Looking at the above graph, the number of deaths was further above the average during the “heatwave” weeks this year than any other summer weeks so far. But looking more broadly, the ONS points out that “Despite an ageing and growing population, fewer deaths were registered” during a seven-week period of abnormally warm, dry weather between 2 June and 20 July,“than during the same weeks of the last two years”.

In general, the biggest fluctuations seem to come in the winter period, whilst figures across summer appear more stable. The number of weekly deaths also generally rises in winter and falls in summer. 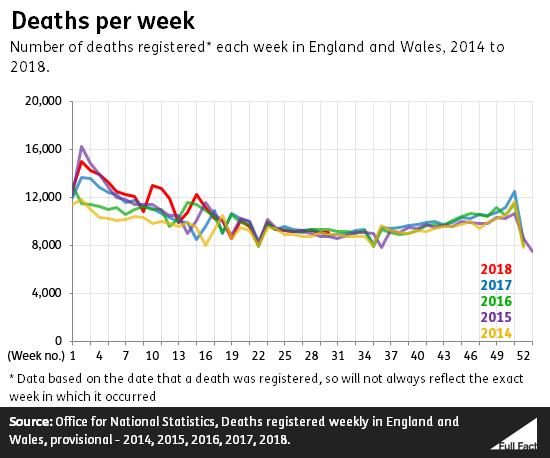 Were these deaths caused by the heatwave?

We won’t know the full picture until later this year. “We cannot say whether any of these deaths are due to the heatwave or from other causes”, an ONS spokesperson told the Guardian.

The ONS says that it will be able to produce more accurate figures by exact day of death later in the year.

High temperatures have been linked to excess mortality in the past

The data also doesn’t tell us the cause of death in all cases, but the ONS has previously linked increased numbers of deaths with abnormally high temperatures.

In 2016, the day in which the highest temperature of the year was recorded saw an extremely high number of deaths, compared to historical averages. The ONS said this “may explain the peak in mortality at this time”. Something similar occurred in 2017.

The ONS also points to academic research which points to a relationship between extreme summer temperatures and excess mortality, especially among older people and children, and those with heart and lung diseases. The frequency and intensity of heatwaves is also predicted to increase as a result of climate change.

So we won’t know the exact impact of this summer’s high temperatures until later in the year, when we have more complete data.

In the meantime, look after yourself in the heat.