How many more consultants are in A&E?

On Tuesday Health Minister Dr Dan Poulter was reported as saying that there are now 414 more A&E consultants than there were in 2009. The claim appeared in the Independent and Telegraph.

He was responding to a report published by the Public Accounts Committee which highlighted a "chronic shortage" of A&E consultants.

The figure is accurate, although the data it is based on hasn't yet been published. This means the relevant statistics aren't equally available to anyone who wants to check the Minister's claim, as they have to be under the Code of Practice for Official Statistics.

Published figures go up to 2012; the claim goes further

The most up to date published information on the number of A&E consultants comes from the NHS Workforce census of September 2012, which was published in March last year. Figures for the period up to September 2013 are due to be published later this month.

The Health and Social Care Information Centre (HSCIC) - the source of the figures - confirmed to us they had provided the Department of Health with the numbers on request and supplied us with the data as well.

The number of A&E consultants is rising

The number has been rising throughout the last decade, as has the number of consultants working in hospitals more generally. 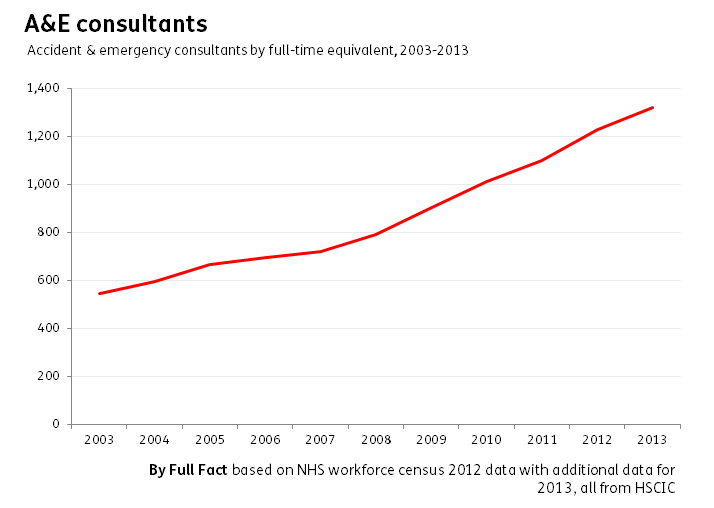 So although the minister was using information that hasn't yet been published, his statement was accurate.

The Health and Social Care Information Centre has commented —

"This was a breakdown of previously published consultant figures which are available on our website. Breakdowns of these and other official statistics are equally available to all on request. We believe we have acted in compliance with the Code of Practice for Official Statistics, but welcome debate about practical application of the Code."

We've agreed to ask the UK Statistics Authority to clarify the rules.