How many people have a disability?

Around 16% of the working age adult population has a disability.

This is broadly correct but slightly too low. An estimated 19% of working age adults have a disability, using the Equality Act definition.

“Around 16% of the working age adult population has a disability.”

An estimated 19% of working-age adults in the UK have a disability, according to the latest data published by the Department for Work and Pensions (DWP).

A person is considered under law to have a disability if they have a long-standing illness, disability or impairment which causes difficulty with day-to-day activities.

There are other ways of defining disability, but the DWP collects statistics using the legal definition. They measure disability using a survey, and changed the questions slightly in 2012/13 to bring their measure of disability in line with the Equality Act 2010 definition. 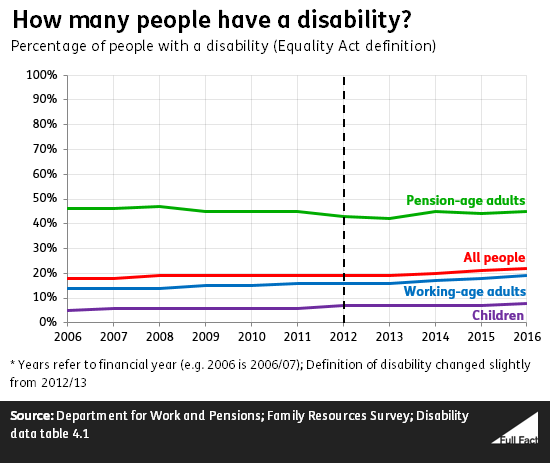 Mobility is the most common impairment, affecting just over half of all disabled people.

Mental health impairments have become more common in the past two years, affecting 20% of disabled people in 2014/15, up to 24% in 2016/17. Among working-age adults with a disability, it is the second most common impairment.