How much does the UK recover in health costs from the EU?

The UK paid out £674 million in health costs to European countries, but received only £49 million in return. Addressing this could “transform the financial situation of the NHS”.

The figures are broadly correct for 2015, although addressing this situation would in itself only have a marginal impact on the financial situation of the NHS. 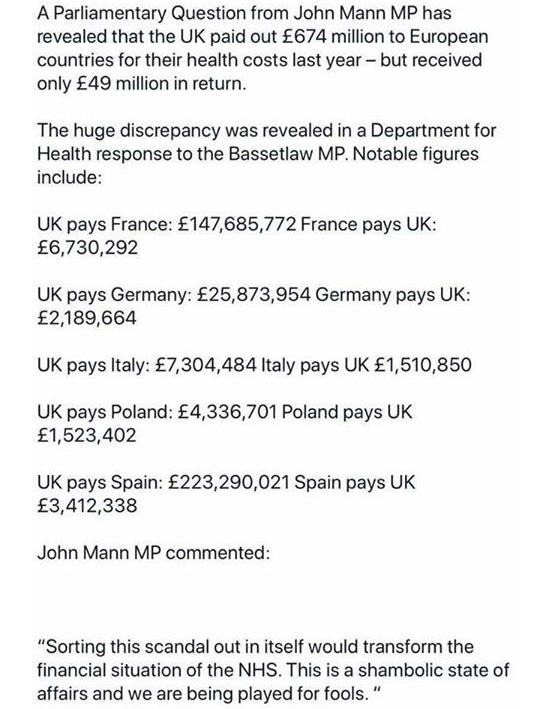 A post circulating on Facebook makes claims about how much the UK pays out to other EU countries for health costs incurred by UK citizens abroad.

The amounts involved are relatively small compared to the overall NHS budget, so the claim that changing this “in itself would transform the financial situation of the NHS” is exaggerated.

Health charities have said that the NHS in England needs an extra £4 billion just to stop services getting worse. Even if the UK Government recouped all of the money it is entitled to, this would represent a funding increase of just 7% of this amount.

Countries reimburse each other for the costs of providing health services

The UK Government reimburses other European Economic Area countries and Switzerland for the cost of providing treatment to people it is responsible for under European Union law, irrespective of nationality.

In the same way, other EEA countries and Switzerland reimburse the UK for the cost of the NHS providing treatment to people they are responsible for under EU law, including UK nationals insured in another EEA country or Switzerland.

The European Economic Area is the 28 European Union countries, plus Iceland, Norway and Lichtenstein. Switzerland is not a member of the EU or the EEA, but is closely tied to these countries through a series of treaties.

The UK also has a series of reciprocal healthcare agreements with countries outside of Europe.

In 2015, EEA countries and Switzerland claimed against the NHS for over £674 million of costs of treating people from the UK overseas. In the same year, the NHS claimed for £50 million of equivalent costs for treating EEA and Swiss citizens in the UK.

These figures are taken from a response to a written question from the Department for Health in England to John Mann MP in 2016, and refer to 2015. Mr Mann then wrote about this issue on his website.

Health is a devolved subject, meaning that generally speaking it is dealt with separately by the UK, Scottish, Welsh and Northern Irish Governments. However, UK Government guidance  makes it clear that EEA and Switzerland cost recovery programmes are managed by the English Department for Health on behalf of the whole of the UK.

The Nuffield Trust has looked at the links between EU membership and the funding of the NHS. They noted that there is a large discrepancy between the treatment costs claimed by and against the NHS:

"The size of the difference between the amount the UK pays out and the amount it receives is partly because foreign citizens in Britain run up less than half as many costs which might be covered under these schemes as British citizens abroad. However, government studies suggest that the NHS is also simply failing to charge when it is supposed to – recouping only a fraction of what should be around £340m from other countries."

There is a strong cross-over between countries where large numbers of UK pensioners live abroad and the amount of money countries claim from the NHS for treating British citizens. 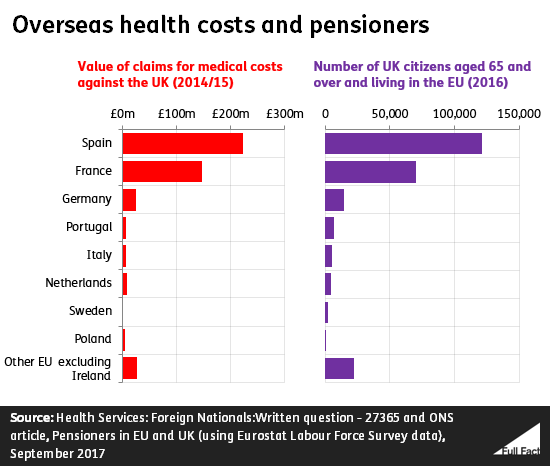 Added to this is the fact that the NHS does not seek as many costs as it could for treatment of EEA and Swiss people in UK hospitals.

The UK Government has said that cost recovery is poor because the NHS struggles to identify patients whose treatment costs it can recover under this scheme. This means that the UK is unable to invoice the appropriate country for the costs of treatment.

The Government has been trying to improve this process. A 2017 evaluation of this work said that there had been “good progress towards increasing cost recovery from EEA patients, although this has slowed significantly”.

The UK Government has estimated that it could recoup £290 million more for treatment of EEA and Swiss citizens, taking the total to £340 million. However, in 2017, the Nuffield Trust, The King’s Fund and the Health Foundation said that the NHS in England needed an extra £4 billion just to stop services getting worse. This figure doesn’t include the funding needs in the other nations of the UK.

If the NHS were to recoup an additional £290 million for treatment of EEA and Swiss citizens, this would represent a funding increase of 7% of this amount. To put this figure into some context, the total budget of the NHS in England in 2018-19 is £126 billion.

It is hard to see how this change could therefore “in itself transform the financial situation of the NHS”.

We updated this piece to clarify in the conclusion that the claim is based on figures for 2015.