Immigration and the NHS: how many staff are from the EU and Commonwealth?

"The NHS for example, we wouldn't be able to sustain our healthcare if it wasn't for the talent and the skills that is coming over from the continent." Petros Fassoulas, Chair of European Movement

"If you take Petros's example about we wouldn't have a health service, the health service is largely run by people who we now try to restrict coming into this country because they're actually Commonwealth countries." Frank Field MP

In the wake of last week's European elections, the Today programme this morning discussed the future of free movement of people within the EU. The discussion turned to the importance of EU migrants to the NHS, and how this compares to that of migrants from other countries.

It's impossible to measure the 'importance' of foreign nationals to the NHS per se, but we can look at the numbers it employs on permanent contracts.

Most NHS staff in England are British nationals

The numbers we've looked at are 'full time equivalents', a measure of the number of staff based on how many hours are worked.

The data tells us about the nationality of staff, not how many have migrated from other countries, because many migrants will have become British citizens. 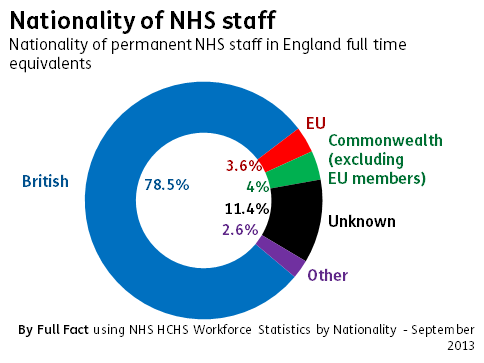 Information on nationality was available for 88.6% of staff covered by the data. The rest were recorded as having an 'unknown' nationality, so the true proportion of EU and Commonwealth NHS workers might differ slightly from what is officially recorded.

Cyprus and Malta are members of both the EU and Commonwealth; the restrictions on entry that Mr Field was talking about don't apply to them, so we've excluded them from the grouping of Commonwealth countries.

We've updated the piece to reflect the fact that the data is on permanent rather than temporary employees, and doesn't include GPs.