This is correct. 89% of medical and dental staff in training who responded to the 2015 NHS staff survey for England said that they work extra hours.

That’s the same as the percentage of consultants who do so.

Overall, almost three quarters of staff in the English NHS say they work more hours than their contract requires. Some of this is paid overtime, rather than unpaid extra work.

It depends what part of the survey you look at.

It asks around 100 questions, many of which seem relevant to “morale” in the ordinary sense of the word.

Mr Corbyn’s office told us that he was referring to two in particular.

They point out that the percentage of junior doctors reporting work-related stress has risen from 20% in 2010 to 35% in 2015.

And those reporting “pressure in the last three months to attend work when feeling unwell” is up from 16% to 44% over the same period.

We’ve asked the organisation who runs the survey if it can confirm that these numbers are comparable over time.

Other measures show an improvement. The overall “staff engagement score” represents, on a scale of 1-5, how NHS staff feel about being able to improve things at work, whether they’d recommend their hospital as a place to work or be treated, and whether they’re “motivated and engaged with their work”.

Labour also mentioned evidence that NHS managers and the Health Secretary himself are concerned about morale in the NHS.

"This dispute with the junior doctors has been on the basis of misrepresented research about weekend mortality. I will read the Prime Minister what the researchers themselves say, and I quote: “It is not possible to ascertain the extent to which these excess deaths may be preventable; to assume they are avoidable would be rash and misleading…”—Jeremy Corbyn

"The 6,000 figure for excess deaths was based on a question asked by the health secretary to Sir Bruce Keogh, the medical director of the NHS. Now we’ve had time to go into these figures in more detail I can tell the house this: that the health secretary was indeed guilty. He was guilty of an understatement. The true figures for excess deaths at the weekend are 11,000, not 6,000."—David Cameron

This exchange doesn’t tell us much about the dispute between the government and junior doctors, or about what’s going on in hospitals at weekends.

In July, Jeremy Hunt said that "around 6,000 people lose their lives every year because we do not have a proper 7-day service in hospitals".

There were two questionable claims contained in that sentence.

First, that 6,000 people a year lose their lives. And second, that this was because of inadequate weekend services in hospitals.

At the time there was no published evidence to back the 6,000 figure up. The Prime Minister today said it came from a private conversation the minister had with Sir Bruce Keogh of NHS England.

It's inappropriate for a minister to cite statistics which can't be checked by members of the public.

When the research (£) was eventually released it said that 11,000 more people die each within 30 days of admission to hospital on Friday, Saturday, Sunday or Monday, compared to the other days of the week, as the Prime Minister said.

Jeremy Corbyn's initial point about 'misrepresented research' wasn't about what the exact number of deaths was.

The research doesn’t say that either 6,000 or 11,000 deaths are caused by not having a seven-day service, or otherwise what the causes are. We've previously asked the Health Secretary to correct the parliamentary record on this point and are pursuing it with his office.

“...the cost of agency staff in the NHS, which now amounts to £4 billion”—Jeremy Corbyn

Spending on agency staff in England could reach about £4 billion in this financial year, according to senior NHS figures.

Speaking to parliament’s Public Accounts Committee, Jim Mackey of regulator NHS Improvement said that spending would “probably get to about £4 billion in total” this year.

We know how much was spent in the first nine months of the year—£2.7 billion. That was £1 billion more than planned.

That’s right for NHS England alone, but experts think this doesn’t capture all relevant spending. If other parts of the health budget are included the increase in spending is lower.

“Other health spending not included in NHS England's budget—for example, spending on public health, education and training, capital and national bodies such as the Care Quality Commission and the National Institute for Health and Care Excellence—is excluded.

“All three of our organisations will continue to use the previous definition in our analysis of NHS funding. Using this definition, and taking 2015/16 as the baseline, NHS funding in England will in fact increase in real terms by £4.5 billion by 2020/21”.

“We have now a much lower unemployment rate, when you look across Europe, our rate just above 5% is one of the lowest in Europe”—David Cameron

That’s right. At the end of the last year only Germany, the Czech Republic, Iceland and Norway had a lower proportion of people out of work.

That’s out of the 31 European countries covered by the statistics agency Eurostat. 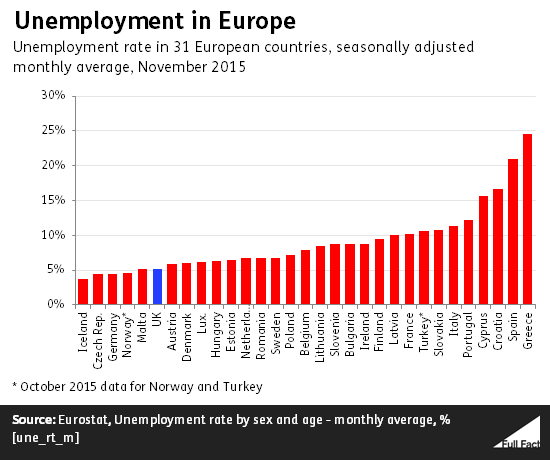