Mental health staff in the NHS

Working for a mental health trust doesn’t mean you work on mental health. This figure hides the detail: mental health nurse numbers in England are down, while staff in the scientific, therapeutic and technical group has gone up.

There are fewer doctors and nurses employed in mental health.

There are around 5,000 fewer nurses specialising mental health between August 2010 and 2017. The number of fully trained doctors specialising in psychiatry and psychotherapy has also gone down by 105 over the same time, but if you count junior doctors the number has increased.

“Impressive sounding, but “employed” is a broad term... In terms of “employed” DOCTORS and NURSES; fact checkers FullFact.org disagree: we in fact have much FEWER of them, as described here...

“Also according to Fullfact.org we have 14% fewer mental health nurses than we did in 2010. In real terms this amounts to 6000. Six. Thousand. FEWER. Nurses. Psychiatry doctor numbers have remained almost flat, in fact falling slightly: We now have 170 FEWER fully trained doctors now vs 2010.”

The number of mental health nurses is down by thousands, and the number of fully-trained doctors in psychiatry and psychotherapy is down slightly since 2010.

So in their argument on Twitter, Jeremy Hunt and Ralf Little are talking about two different things.

The best news on actual doctors is that if you include junior doctors the number has risen slightly in recent months. It’s now up by 122 since 2010. But if you stick to fully-qualified doctors, the number is still falling.

There are other ways to measure the number of people who work in mental health care too. We’ve not covered them all here, just the ones Mr Hunt and Mr Little focused on.

As far as we’ve seen, there’s no clear agreement between NHS bodies for how many ‘mental health trusts’ there are in England. Even then, the staff working in these trusts won’t all necessarily specialise in mental health, and some will work specifically with people with learning disabilities.

NHS Digital provides figures for 52 mental health trusts it identifies. Those show the number of full-time equivalent staff has gone up by 3,700 between July 2013 and July 2017. There were around 171,000 staff in 2013 and 175,000 now. It’s difficult to compare before 2013 because the structure of NHS England was different.

So where does Jeremy Hunt get 4,300 from? He’s using a slightly narrower definition of mental health trusts.

The Department of Health told us that Mr Hunt’s claim refers to the change in staff in something called the “mental health and learning disability benchmark group” between July 2013 and July 2017.

This is a group of trusts selected according to how much of their time is spent on mental health care. Specifically they need to have “over half of their outpatient activity in mental health specialties”. The trusts include the majority of mental health trusts in NHS Digital’s list of 52 but, surprisingly, not all of them.

NHS Digital explains further about the trusts included: “Some trusts concentrate solely on community services, mental health or learning disabilities. Others may have significant acute expenditure but mostly in medicine and elderly, indicating cottage and community hospitals rather than district general hospitals.”

The increase in staff Mr Hunt talks about wasn’t necessarily new people working in mental health. In some cases, staff may have been effectively re-categorised and added to the mental health total, rather than newly hired.

There were around 1,400 full-time equivalent staff who were counted in the figures Mr Hunt is using for the first time in 2017. These weren’t necessarily new staff, they were just being counted differently.

Mr Hunt was referring to the change in the numbers of doctors, nurses, health visitors and midwives, ambulance staff and staff in the scientific, therapeutic and technical group when he said that numbers of qualified staff had gone up by 2,000. That’s correct, but it’s not a very useful measure.

Almost all of the change is made up of a rise in the numbers of scientific, therapeutic and technical staff (of about 3,400), balanced out by a fall in the number of nurses and health visitors (around 1,200). The number of doctors hasn’t changed much at all over the five years. 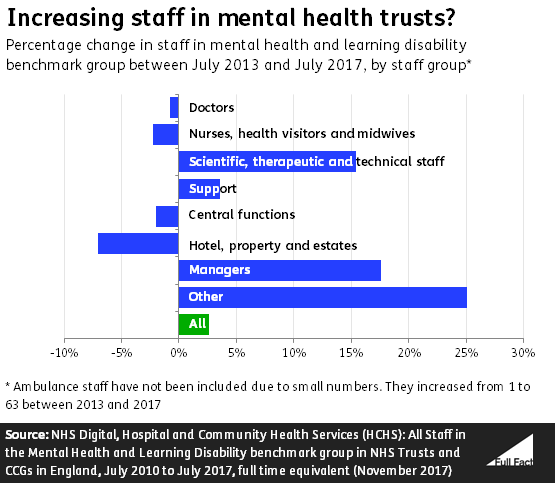 Mr Little was quoting a factcheck that we wrote in January. Back then there were around 6,000 fewer mental health nurses comparing September 2015 with 2010.

These figures came from NHS Digital, which publishes information on the NHS England workforce. It told us it uses a broad definition of mental health nurses, this definition includes nurses who work in learning disabilities. As of August 2017 learning disability nurses make up around 9% of all nurses in this broader definition.

Using the latest figures, the number of nurses working in mental health (including learning disability nurses) has fallen by 7,000 or 15% between August 2010 and August 2017. Just looking at those nurses working in mental health (excluding learning disability nurses) the number has fallen by around 5,000 or 12% over the same time period.

Back in January there were also 167 fewer fully trained doctors specialising in psychiatry and psychotherapy in September 2016 compared with the same month in 2010. Looking at all doctors, including junior doctors, there were 36 fewer over the same period.

Overall there were 9,000 doctors specialising in psychiatry in NHS England hospitals and community health services in August 2017.

Since we wrote this article NHS Digital, which publishes the figures on the NHS workforce, has published a report looking at the ways of counting the mental health workforce. It says there is no one way to count mental health staff and that none of the ways it has identified gives a full impression of the staff working in mental health and learning disabilities if used in isolation.

Using the widest possible definition of the mental health and learning disability workforce, it has increased by 2,500 between September 2013 and 2017, using the latest available figures.