Natural Cycles, which markets itself as a contraception and fertility app for women, has just had one of its Facebook adverts ruled as misleading by the Advertising Standards Authority here in the UK.

The app uses information about the user’s body temperature, plus some other inputted data, to estimate when the user is ovulating and to predict which days are ‘safe’ to have unprotected sex, and days where this is more likely to result in conception.

How does it work?

Users have to measure their temperature as soon as they wake up (before they sit or get up) then manually record it in the mobile app.

The app uses this data and an algorithm to advise whether the user is having a “red” (fertile) or “green” (infertile) day.

Has it been investigated?

In the UK, the Advertising Standards Agency (ASA) was asked to investigate the app over an advert and video it posted on Facebook in 2017. Complaints were made about Natural Cycles describing itself as a “highly accurate contraceptive app” and a “clinically tested alternative to birth controls methods”.

The ASA concluded that these claims were “misleading” and ruled the ad “must not appear again in the form complained about”.

“We told [Natural Cycles] not to state or imply that the app was a highly accurate method of contraception and to take care not to exaggerate the efficacy of the app in preventing pregnancies,” the ASA said.

We contacted Natural Cycles, which told us: “We respect the outcome of the investigation”, and that it had removed the advert as soon as it was notified of the complaint.

It was also investigated in Sweden, and that assessment has now been completed after Natural Cycles clarified the risk of an unwanted pregnancy in their instructions for use of and within the app.

The Swedish Medical Products Agency told us they launched an investigation because of “an increased number of reports received from healthcare providers during a short time period about unwanted pregnancies that occurred when using [Natural Cycles] as a contraception method.”

Södersjukhuset hospital in Sweden told us that at least 68 women who sought abortions there between September 2017 and March 2018 had been using Natural Cycles as their contraceptive (though we don’t know how many of these women went on to have abortions). In total, there were 1,035 abortions in the clinic during that period.

The hospital said women were not required to tell the hospital what contraception they’d been using, and that these figures collected did not constitute formal research.

The Swedish Medical Products Agency said the primary purpose of its investigation was to “verify that the documentation, that is the base for the CE marking of the product, is correct and sufficient.”

It was also checking that the number of unwanted pregnancies was “within the expected number.”

The Swedish Medical Products Agency monitored monthly data on reported unwanted pregnancies among the app’s active users in Sweden over a six month period between January and June 2018. The agency concluded that “the number of unwanted pregnancies during the assessed time period is consistent with data shown in the clinical evaluation included in the certification documentation”. That said, Natural Cycles’ clinical research has been criticised by other organisations, which we’ll go into later.

The agency told Natural Cycles to “clarify the risk of unwanted pregnancies in the instructions for use and in the app.”

“These issues have been addressed by Natural Cycles and thereby our review is completed.”

Natural Cycles told us it was “able to demonstrate that these changes had already been implemented earlier this year.”

How effective is it compared to other forms of contraception?

The ASA noted that “typical-use” efficacy of the app in research showed that it was “significantly less effective than the most reliable birth control methods, such as long acting reversible contraceptive methods.” It added that it “understood that the typical-use effectiveness of the app was comparable to that of some other types of contraception, such as barrier methods”, like condoms.

Typical use describes how effective a form of contraception is likely to be when it isn’t always used correctly. This is the more realistic measure , as it’s inevitable that sometimes people make mistakes.

Perfect use is when the method is always used correctly, and doesn’t allow for any human error.

To compare the efficacy of different types of contraception, we can compare each method’s Pearl Index—which is how many women out of 100 will likely get pregnant in a year using that form of contraception.

Fewer than 1 out of 100 women will get pregnant per year using the contraceptive implant or IUD, according to the NHS.

A 2016 study of around 4,000 Swedish women using the Natural Cycles app reported that seven out of every 100 women typically using the app were likely to get pregnant in a year. Although this is lower than the typical rate for several other widely used contraception methods according to the NHS (it’s nine in 100 for the combined pill and 18 in every 100 for condoms), there are concerns about the research behind Natural Cycles’ figure. 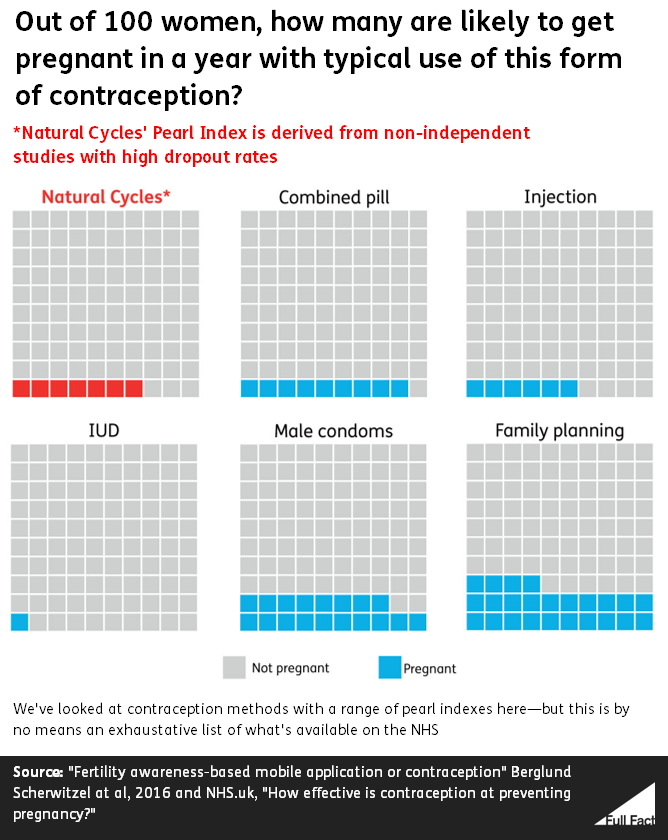 Of course, these figures don’t take into account the side-effects of any of these forms of contraception or any protection they offer against sexually transmitted infections.

A lack of independent research

In an article about the app, the NHS said there was a “conflict of interest” with the study on Natural Cycles published in 2016.

The NHS pointed out that two of the paper’s lead authors (Elina Berglund Scherwitzl and Raoul Scherwitzl) created the app, and another author was employed by the company. The study was also paid for by Natural Cycles. A second paper published in 2017, which also reported a typical use pearl index of seven, also had these issues.

When Natural Cycles was approved for sale in the UK in 2017, the Faculty of Sexual and Reproductive Health of the Royal College of Obstetricians and Gynaecologists, sexual health charity the FPA, and Dr Cecilia Pyper of the University of Oxford and FertilityUK called for “more large-scale, independent trials” for fertility apps to ensure they are “based on the same rigorous scientific research as other contraceptive methods”.

The participants in the 2016 and 2017 studies had paid to use the app like any normal user. The NHS said this meant they were “keen to try this method” and their usage “may not be a true indication of the effectiveness of this type of app if it was available for free.”

The 2016 study was a retrospective analysis, which means it used data that had already been collected, rather than collecting in real time as the study progressed. The NHS said these types of studies “are flawed in that the data collected was not intended for such analyses and may not always give an accurate representation.”

We asked Natural Cycles if there were plans for any independent research into the app. It told us that “all three clinical studies evaluating Natural Cycles have been published in renowned, international peer reviewed journals”, and that it had collaborated with scientists from leading research institutions to do the research.

It also said it was “standard practice for companies to lead clinical research projects evaluating their own products, and as Natural Cycles’ founders were scientists, this option “made the most sense”.

Natural Cycles is licenced for sale in the UK, although NHS doctors don’t prescribe it so it’s not available for free like other forms of contraception. The app costs between £40 and £72 annually.

Natural Cycles has a CE mark meaning it can be sold throughout the EU. We’ve more information on how medicines and health appliances gain approval here.

In the US the app has just been licenced by the Federal Drug Administration.

We updated this factcheck after the Swedish Medical Products Agency concluded their investigation into Natural Cycles.