Size of the shortfall

If it's going to provide the same sorts of services at the same quality to more patients than it currently does, it will either need more money on top of inflation or to find ways to make the money it does have go further. Or both.

So to estimate the size of the shortfall—effectively the amount of money the NHS will need from government—we need an estimate of how quickly it improves its efficiency.

Four possible futures were set out last year by a range of leading organisations in the English NHS. The Five Year Forward View considers the size of the shortfall based on different levels of efficiency savings. 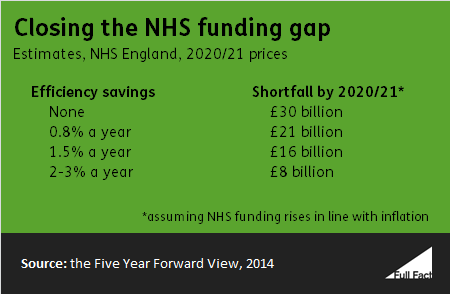 In the least optimistic scenario, the NHS makes no efficiency savings. Even if its funding keeps pace with inflation, there'd be a £30 billion per year shortfall by 2020/21.

Looking further ahead from now to 2030/31, separate research by the Health Foundation has put the spending required at £65 billion a year if efficiency savings are 1.5% a year or £48 billion if savings are at 2.2%.

Efficiency savings allow the NHS to treat more patients or treat them at a better quality, or both, for the same amount of money (at least once the effects of inflation have been stripped out).

Recently the NHS been trying to meet the "Nicholson Challenge"—savings of £15-20 billion between 2011/12 and 2014/15. The government has said it's on course to meeting this target, although the Public Accounts Committee and National Audit Office have raised some questions about the Department of Health's figures on this in the past.

Between 2004/05 and 2011/12 the NHS is estimated to have made efficiency savings of about 1.5% per year. That means for every £100 it spent in a given year it only spent £98.50 on the equivalent services in the next one (again, leaving out inflation). But analysis by the Health Foundation suggests efficiency savings may have slowed down in the following two years, 2012/13 and 2013/14.

So efficiency savings of 2-3% in the next parliament would represent a big jump.

There are also concerns that the NHS has exhausted the easier and more "obvious" routes towards making savings, such as restricting pay rises for staff.

The King's Fund think tank has said closing the gap to £8 billion would be "very challenging". Others have suggested that measures to transform the NHS are likely to improve efficiency, but after 2020 rather than before.

The Five Year Forward View says that if efficiency savings are to be made in time to close the gap by 2020/21 then money needs to be put into transforming the way parts of the NHS operate. The NHS would need "infrastructure and operating investment to rapidly move to the new care models and ways of working described in this Forward View".

So what could that mean in practice?

NHS England says it is working with a small number of areas "with the aim of developing prototypes that work, before promoting the most promising models for adoption by the wider NHS."

29 sites in England have been chosen to be at the vanguard of transformation. The types of organisation that are involved vary across different sites.

At nine of them, primary and acute care will be integrated. In the first instance that could mean, for example, hospitals opening their own GP surgeries. In some cases the hope is that patients could have all their health needs from GP to hospital treatment arranged and delivered by this one organisation.

At a further fourteen sites, the focus will be on expanding GP groups to include nurses and hospital specialists so that they can provide some outpatient care outside of hospital settings.