NHS pay deal: why are some staff not getting their promised rises?

A number of media outlets have been reporting that NHS staff are not getting the pay increases they were promised under a new pay deal. The deal kicked in last month, with pay rises backdated to April.

The Royal College of Nursing (RCN), a nursing union, had told its members that they would all receive an immediate 3% pay rise under the new deal (it’s unclear if other trade unions made similar promises).

Following a vote among their members, most NHS trade unions accepted the new deal in June. Yet following the introduction of the deal in July, many NHS staff only saw a pay increase of 1.5%.

The confusion broadly rests on a miscommunication of the deal’s technical details.

This pay deal covers staff on ‘Agenda for Change’ contracts in England, from 2018/19 to 2020/21, and we’ve previously explained its implications in more detail here. It should also be noted that staff could have received smaller pay rises without the new deal: so whenever we refer to a pay rise of x% in this piece, we mean in comparison to salaries in 2017/18. We’re not comparing it to a theoretical smaller pay rise which staff could have got in 2018/19 without the new pay deal.

Different jobs are assigned to different pay “bands”. Within these pay bands there are a range of “pay points”, with each assigned a different salary. Someone starting a role will normally begin on the lowest pay point in their job band, before rising by one pay point per year until they reach the top point.

The new pay rises come in two parts, but not at the same time

The new pay deal is based on the dual effect of an increase in the basic salary at each pay point, and the expectation that staff will move up a pay point each year.

In March, the NHS Staff Council (the body which oversees Agenda for Change pay, made up of both employer and union representatives) published a pay journey chart showing how much an individuals’ pay would go up by each year, factoring in both basic salary increases, and the “pay progression” (where someone moves up a pay point).

But the salary increase and pay progression do not kick in at the same time.

On 1 April each year, salaries increase for all pay points (this year these increases were backdated for the first few months due to the deal not being implemented until July).

But the pay progression happens on a separate date (known as the “step date”), which is when the individual has been on their pay point for a year. This means that they will not receive their full pay rise until their step date. This part of the pay rise will not be backdated to April.

The new deal includes an appraisal process, which staff must complete in order to progress to their next pay point. The Royal College of Nursing points out that there were also annual appraisals under the old system, and that staff were “almost never” prevented from progression to the next pay point.

What does that mean for staff in practice?

Many staff will have only seen a 1.5% pay increase in their first pay packet under the new deal, not the minimum 3% which the NHS Staff Council’s “pay journey” chart suggests.

Only staff on the top and bottom pay point of a band will have seen an immediate pay rise of over 1.5% in their basic salary (except in Band 2). Roughly half of affected staff are already at the top pay point.

For the staff who aren’t at the top point, the rest of their pay rise will come only when they reach their step date. This could be any time between April 2018 and March 2019, and pay this pay is not backdated to the start of the year. Once pay progression kicks in, all staff member’s salaries will be at least 3% higher than they were in March 2018 (except for a few high earners). So while they will see a 3% by rise by the end of 2018/19, many staff will spend much of 2018/19 with pay only 1.5% higher than it was previously.

In future years, some staff will automatically jump to their next pay point in April, even if it’s before their step date. This is because the new deal is getting rid of some of the pay points within a band, and staff on a pay point when it is removed will be immediately moved up to the next one. 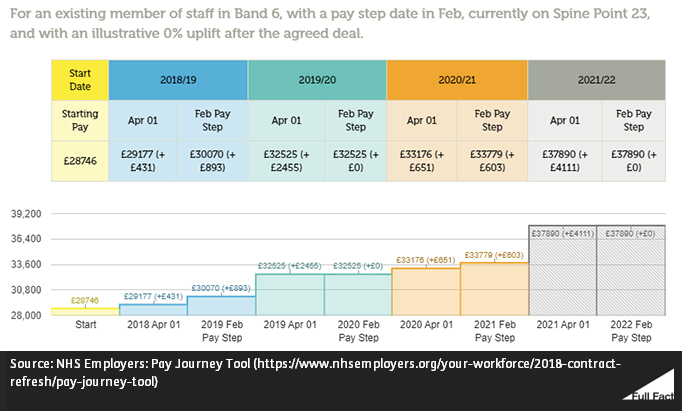 Was this issue made clear to staff when they voted for the deal?

The RCN says it incorrectly informed its staff that they could expect an immediate pay increase of 3% under the new pay deal, but it’s unclear how widely this impression was held across all staff voting on the deal. We don’t know what resources NHS staff had access to prior to the vote.

The terms of the deal were outlined in March, and voted on in June.

The individual pay journeys chart, published by the NHS Staff Council in the draft deal in March, outlines pay rises for 2018/19, combining the impact of the two aspects (basic salary + pay progression) into one figure, without mentioning that they occur at different times. There is a reference to pay rises occurring on a specific “pay step date” in an Annex at the end of the document.

The step point factor is also explicitly outlined in the NHS staff handbook, but this point was only ratified and published in late June/early July, after the deal had been voted for.

We’ve asked NHS employers if the fact that the pay increase would come at two staggered points over the year was made clear to NHS staff, and their representative organisations, prior to them voting on the deal.

Other factors can affect a payslip too

For the lowest pay point to receive a 1.5% increase in basic salary, this amounts to a rise of £22 a month. Yet some NHS staff have been reporting that their salaries have gone up by only pennies—why so?

As we haven’t seen their payslips, we can’t know for certain, but research by the insurance firm Royal London suggests that higher pension contributions could be a factor. 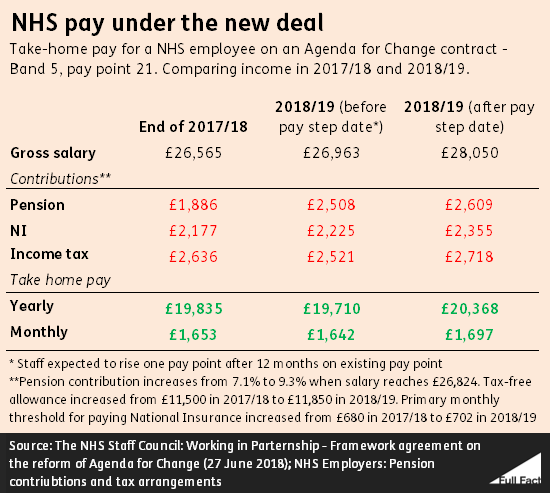 This is a very specific case, which won’t apply to the vast majority of staff. It should, of course, also be noted that pension contributions still go to the employee, only not as part of their monthly pay. The NHS’ contribution to an employee’s pension does not change as their salary increases (it’s 14.38% for all).