NHS pay has fallen behind inflation since 2010

Thousands of NHS staff, including nurses, midwives and ambulance staff went on strike today in a dispute over pay.

The latest figures show that the average pay for NHS staff hasn't kept up with inflation during the four years to June 2014. By the CPI measure, inflation went up 12% in that period, while average annual pay for an NHS worker has risen by 6%, from £27,980 to £29,750.

Those figures don't include agency workers, or GPs. 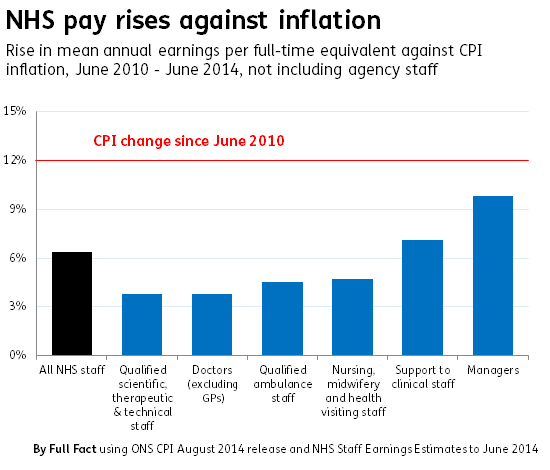 It's important to note that these figures don't show what's happened to the pay packets of individuals, just to average pay (including bonuses). And earnings alone don't give us the full picture of how 'well off' staff are; they don't factor in changes in working conditions, responsibilities or hours, for example.

Wages after inflation across the wider economy have also been falling since 2008, and are still rising more slowly than inflation by the CPI measure.