The number of GP training places is rising.

This is correct in England, although not all the places are being filled.

There are 1,000 fewer GPs now than there were when Theresa May became Prime Minister.

This uses figures that aren’t comparable, but it’s still almost certain that the number of GPs in England has fallen since last year, and could have fallen by over 1,000.

“There are 1,000 less GPs than there were the day she became Prime Minister”

The number of GPs in England has almost certainly fallen since last year, but it’s difficult to put an exact number on it. Mr Corbyn’s figure of 1,000 fewer GPs uses figures that aren’t comparable, although this also means the actual fall could well be larger than this.

Theresa May said during Prime Minister’s Questions that there were more GPs and more training places for GPs. It’s not clear whether she meant to say the first of these – which would be an inaccurate claim – as she appeared to correct herself straight away. Only the claim about training places appears in the parliamentary record.

It’s correct that there are more training places available for GPs and more GPs in training filling those places. But we don’t know whether this will be enough to have 5,000 extra doctors in General Practice by 2020, as the government has promised.

The number of GPs has been falling, but it’s difficult to say by how much

It’s not actually possible to accurately compare the number of GPs in England over a long period of time.

That’s because many of the older figures are known to be inaccurate, and NHS Digital—which publishes the figures—has been making improvements to how GP numbers are recorded in recent years.

The published figures on GP numbers in England do show Mr Corbyn’s drop of just over 1,000 GPs between September 2016—shortly after Mrs May entered office—and the latest figures in September 2017. That’s using a full-time-equivalent measure of staffing numbers, which takes into account the hours these staff are working.

There are currently an estimated 33,300 GPs working in the English NHS on this measure. Last year, there were 34,500 on the records.

But this isn’t quite comparing like-with-like.

The main reason for that is because the older figures are known to undercount the number of locum GPs. These are doctors who provide support where and when they’re needed. They usually cover positions temporarily at surgeries, or provide an extra pair of hands during periods of high demand.

NHS Digital gets these figures from local GP practices’ records. In early 2017, NHS Digital became aware that GP practices weren’t necessarily recording all of the locum GPs who had worked for them. The result was a sharp increase in the number of recorded locum GPs in March 2017.

Taking this into account might mean the recent fall in GP numbers is larger in reality than Mr Corbyn suggested. In addition, if you take locum GPs out of the equation, it’s estimated there are around 1,500 fewer GPs since September 2016.

Even the recent figures aren’t perfect. NHS Digital needs to make estimates to account for GP practices it doesn’t get data from. It’s still possible that the number of locum GPs, for example, isn’t being counted as accurately as it could be.

It’s also not possible to compare GP numbers now to what they were back in 2010, as there were other changes to the figures since then.

The number of GPs in training and training places for them is rising, but not all the places are being filled

Theresa May is broadly correct to say the number of GP training places is rising.

So far in 2017, there have been 3,250 GP training places available in England. 3,093—or 95%—of these have been filled through the main recruitment rounds. This is the first year since 2009 to show the number accepted for training via the main routes passing 3,000.

The same number of places was available last year, but only about 90% were filled then. 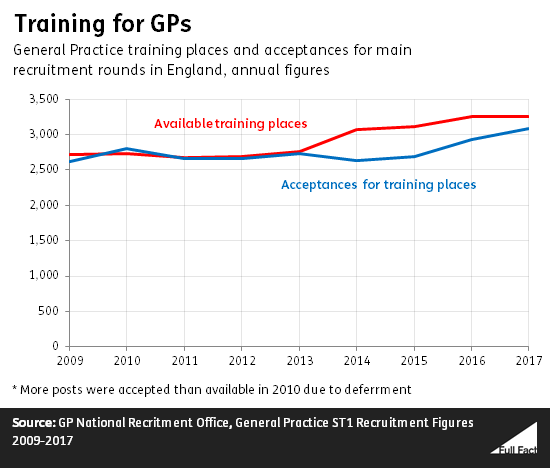 The government is facing difficulties in meeting its recruitment targets

The government’s commitment since 2015 has been to increase the number of doctors working in general practice by 5,000 by the end of the decade. It restated that commitment earlier this year.

The NHS has been taking measures to try and achieve this. Along with increasing the number of training places, it’s been making recruitment drives and trying to retain more existing staff.

But it’s not clear yet whether this will be enough.

For a start, the government itself has expressed some concerns that a large number of GPs are retiring. When asked this summer about the recent falls in GP numbers, the Health Secretary said that:

The National Audit Office and health think-tank the King’s Fund have also said it could be difficult to achieve the target given the falling numbers of GPs currently, the shortfall in training places being filled, more people working part-time, and difficulties keeping hold of existing staff.

Even with the extra number of GPs currently entering training that the Prime Minister talks about, it’s difficult to say how much they’ll eventually impact the overall GP numbers, when that will happen, and how many existing GPs will leave the profession over the next few years as well.

Professor Helen Stokes-Lampard, Chair of the Royal College of GPs, told us:

“We’re seeing more foundation doctors than ever before enter GP specialty training, which is fantastic, but from that point, it takes a minimum of three years before those doctors can practise independently as a GP. For one reason or another, many GP trainees take longer than three years to attain their Certificate of Completion of Training (CCT).