Non-Covid deaths in private homes are up, but have decreased elsewhere

This refers to the number of deaths in private homes registered in England between March and September this year compared to the five-year average. Across all locations, the numbers of deaths from some of these diseases are in line with historic averages.

The front page of the Metro newspaper makes various claims about the rise in deaths from diseases and conditions which aren’t Covid-19 between March and September this year. 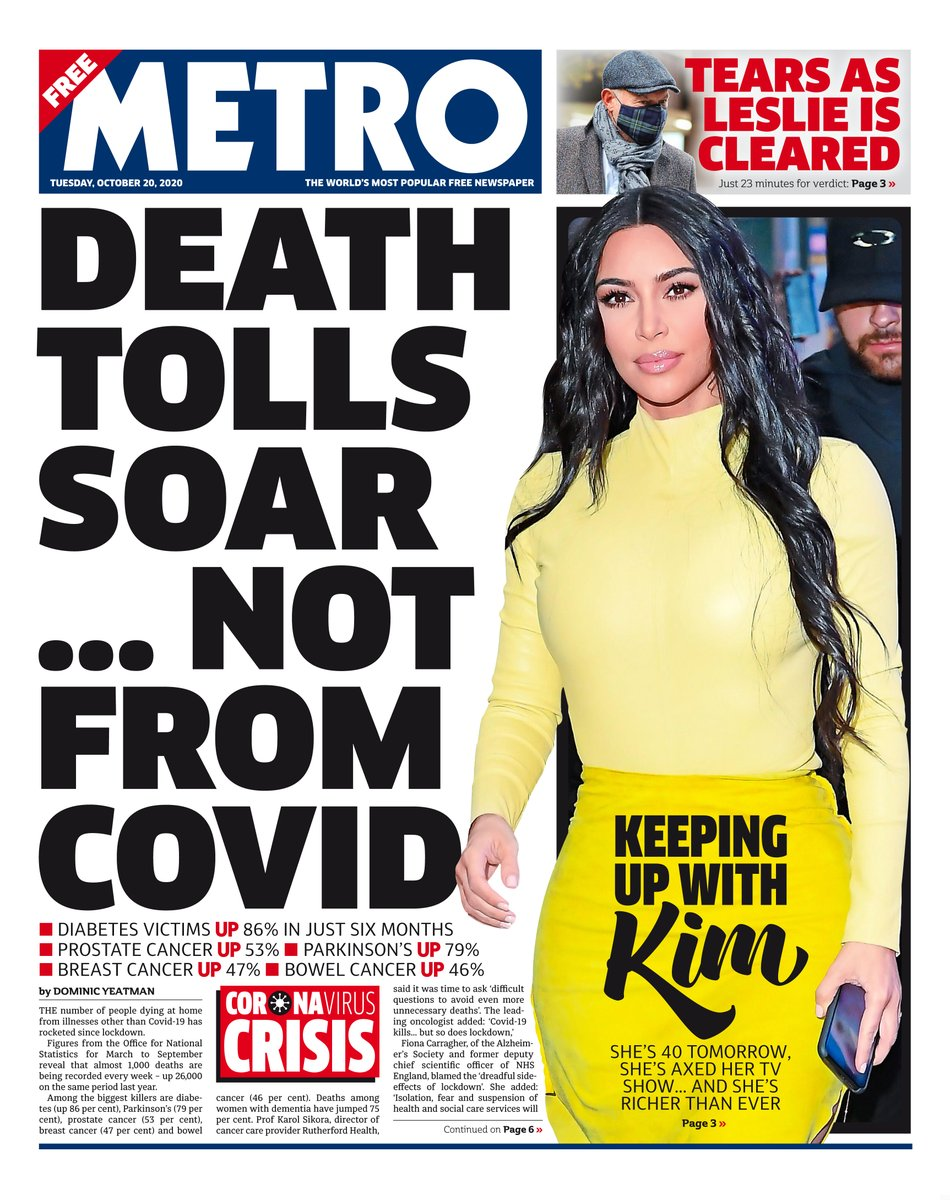 While the first paragraph of Metro’s article suggests this, it is not completely clear, and the headline and subhead make no reference to this fact.

This is important context, because while deaths in private homes from conditions other than Covid-19 have increased, deaths outside of private homes (i.e. in hospitals, care homes and hospices) have, in many cases, decreased.

The article does go on to quote Professor David Spiegelhalter from Cambridge University’s Statistical Laboratory as saying: “Most of these deaths would normally have occurred in hospital, and people have either been reluctant to go, discouraged from attending or the services have been disrupted. It is unclear how many of these lives could have been extended had they gone to hospital.” This quote appears on page 6 of the paper.

What do the figures tell us?

To take one example, the front page says that prostate cancer deaths are up 53%.

This refers to the change in the number of deaths from prostate cancer in private homes in England between 14 March and 11 September 2020 compared to the five year average.

However this is almost entirely counterbalanced by a fall in the number of prostate cancer deaths outside of private homes. In all settings, there have been 4,979 deaths from prostate cancer registered in England over this time period, compared to the five-year average of 4,794.The front page also says that breast cancer deaths are up 47%. Again, this refers to the deaths of women in England in private homes over this period. But overall, the number of deaths from breast cancer is almost identical to the five-year average, at 4,565 compared to 4,550.

It is possible that some of these deaths from dementia were the result of Covid-19 deaths being misclassified, especially during the early part of the pandemic when testing was scarce, an issue we explore further here.

For the other diseases mentioned in the Metro, the ONS has not published the number which occurred outside of private homes so we cannot make the same comparisons. We have asked the ONS for this data.

That said, we can look at the total number of deaths from other diseases to further indicate that in most cases, non-Covid-19 deaths in private homes are generally counterbalanced by a decrease in other settings.

The ONS lists “ischaemic heart diseases” as the leading cause of death for men and women.

In England, 23,843 deaths from ischaemic heart diseases were registered from 14 March to 11 September this year. That’s slightly below the five year average of 24,180.

Similarly for cancers of the trachea, bronchus and lung, there were 12,607 death registrations in England over this period against 13,364 over a five-year average.

Deaths from “chronic lower respiratory diseases” are also slightly down compared to the average.