People from black and minority ethnic populations are most affected by detentions under the Mental Health Act.

If you're black and minority ethnic, you're more likely to be detained than if you're white. Overall, more white people are detained, since they make up a larger portion of the population.

Four times as many black people are being detained as white people.

If you're black, you're about four times as likely to be detained than if you're white. Overall, more white people are detained, since they make up a larger portion of the population.

The number of people detained under the Mental Health Act has increased by 47% in ten years.

“Detention rates under the Mental Health Act are too high. And it is people from black and minority ethnic populations who are affected the most.”

“The number of people detained under the [Mental Health] Act is rising at an alarming rate - up 47% in 10 years. We detain almost four times as many black people as white people.”

It is correct that the number of people being detained in England under the Mental Health Act has been increasing. If you are a black person you are more likely to be detained under the Act than a white person or someone of any other ethnic group.

Overall, more white people are detained, since they make up a larger portion of the population.

“Under The [Mental Health] Act, people with a mental disorder may be formally detained in hospital (or ‘sectioned’) in the interests of their own health or safety, or for the protection of other people”, according to NHS Digital.

The majority of these detentions followed someone being admitted to hospital. 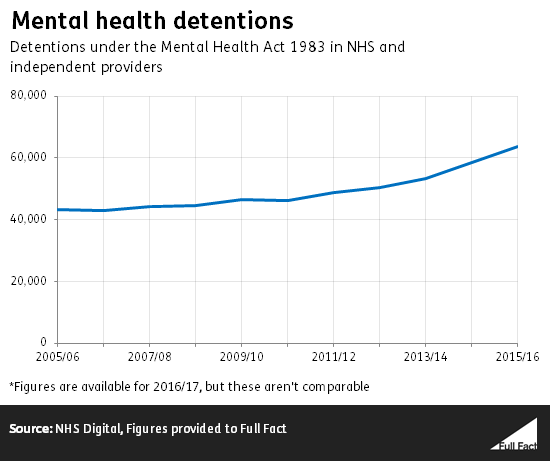 Another way to look at the figures is as a snapshot in time, rather than over a year.

At the end of March 2016, for example, there were around 20,200 being detained in hospital under the Mental Health Act and another 5,400 being treated in the community under Community Treatment Orders.

Newer figures for 2016/17 are available, but because of changes to the way the information is collected these aren’t comparable. Not all hospitals have provided the information yet either. NHS Digital, which publishes the figures, says that where it can compare between last year and this year, the number of detentions seems to have increased by around 2%.

The Royal College of Psychiatrists says it doesn’t know why detentions are rising. This is one of the focuses of a government review of the Mental Health Act which Professor Sir Simon Wessely will lead. A report by the Care Quality Commission suggested that better care planning for people who are repeatedly detained under the Act and intervening at an earlier stage might help reduce the number of people being detained overall.

There are other figures

These figures cover the bulk of people detained under the Mental Health Act, but they’re not the whole picture. People can be detained in police cells as a “place of safety” if the police think they are likely to be a danger to themselves or to the public.

Around 1,800 people were detained in police cells under the Mental Health Act in England in 2015/16, according to figures from the National Police Chiefs Council. The NPCC told us newer figures are due to be released this week.

The use of hospitals as a ‘place of safety’ for people being detained under the Act increased in 2015/16, but NHS Digital says that this is partly linked to the decreasing use of police cells for this purpose

These figures also don’t cover people who are in hospital voluntarily because of a mental health condition or those who are placed in guardianship under the Mental Health Act.

There weren’t four times as many black people detained, but they were disproportionately detained

Someone who is black or black British was four times more likely to be detained under the Mental Health Act than a white person in 2014/15.

These figures are known to undercount the number of people detained under the Mental Health Act and NHS Digital says that the figures are “presented to highlight differences in numbers and rates between different groups only”.

There are more recent figures for 2016/17 published since the Prime Minister and Professor Sir Simon Wessely made their statements. These show that the difference between the various ethnic groups has remained roughly the same since 2014/15.

5% of people detained in police cells under the Mental Health Act in England and Wales were black in 2015/16, according to figures from the Home Office. These figures are only based on 15 of the 43 police forces in these countries.

If you're black, you're more likely to use mental health services generally than if you're white

Black people are more likely than white people to be in contact with NHS-funded mental health services or learning disability services. But the difference isn’t as great as it is when looking at detentions.

Asian and Asian British people were least likely to be in contact with mental health and learning disability services. Those in the category ‘Other’ ethnic group were most likely.

These figures are estimates as the way the figures were collected was changed in 2015. This meant that NHS Digital had to calculate how many people were likely to be in contact with mental health services and detained under the Mental Health Act based on trends in previous years.