Correct. In 2018 the government and the NHS staff council agreed a three year pay deal which saw pay for nurses increase annually in April between 2018/19 and 2020/21.

Last year some nurses starting their career got a pay rise of over 15%.

We don’t know exactly what Mr Hancock is referring to here but it doesn’t seem right. Nurses towards the lower end of the pay scale may have seen a cash terms salary increase of 3% to 12% between 2019/20 and 2020/21. These figures are lower when you factor inflation in.

“We put up nurses’ pay last month, and in fact last year we had the fastest rise, the biggest rise in pay—especially for nurses when they are starting their career and the lowest paid nurses, who got a pay rise, very significant, of over 15%. So there has been a significant pay rise for nurses.”

In his response he claimed that nurses’ pay increased last month and suggested that last year some nurses received a pay rise of over 15%.

Pay did increase last month, at the beginning of the new financial year. Back in 2018 the government and the NHS Staff Council agreed a pay deal which saw salaries for staff on ‘Agenda for Change’ contracts in England (including all nurses) rise annually for three years.

As for the claim that pay increased last year by 15% for some, we don’t know exactly what Mr Hancock was referring to but it doesn’t seem quite right to us. We asked the Department for Health and Social Care for clarity but it did not confirm to us specifically where the figure came from.

It doesn’t appear that any group of “the lowest paid nurses” would have seen their pay increase by this much over a single year as claimed.

Salaries for most NHS staff are arranged into bands, and newly-qualified nurses start out in band 5 which starts at £24,907 in England. The more years of experience nurses accumulate, the higher their pay gets at band 5 level.

Between 2019/20 and 2020/21 nurses in band 5 would have seen their salary increase by between 3% and 12% through a combination of the amount you could earn at band 5 being increased, and their own progression through the band after gaining another year of experience.

So it doesn't appear that any group of lower paid nurses saw a salary increase of 15% over a year. Also money is only as valuable as what it can buy you, so when comparing pay over time, it’s most useful to adjust these figures to account for inflation, allowing you to calculate what’s called a “real-terms” change.

This 12% increase is a cash-terms increase and so doesn’t account for inflation.

It’s possible that Mr Hancock was referring to a pay increase over multiple years and misspoke.

Looking over the past decade, and adjusting for inflation, there have been real-terms increases in nursing pay in recent years, but these haven’t counterbalanced real terms decreases which happened over the early and mid-2010s.

This holds true regardless of which measure of nurse pay you look at.

One measure is the average pay of all nurses, regardless of band. The average basic pay for a full-time equivalent nurse or health visitor increased by 2% between the year to June 2018 (when it was at its lowest real terms level over the last decade) and the year to December 2019.

But since the year ending August 2010, when the NHS started publishing these statistics, average nurse pay has fallen by 7.4% in real terms.

The weakness of this measure is that it might reflect the changing makeup of nurse seniority in the NHS, as it is an average of all nurses pay, rather than anything more meaningful about pay.

So another measure you can look at is the salaries each band is set at. You could compare the change in every band, but Mr Hancock referred to nurses just starting their career so we’ll just look at the nurse starting salary.

As mentioned, all newly-qualified nurses start at Band 5, which is currently £24,907. 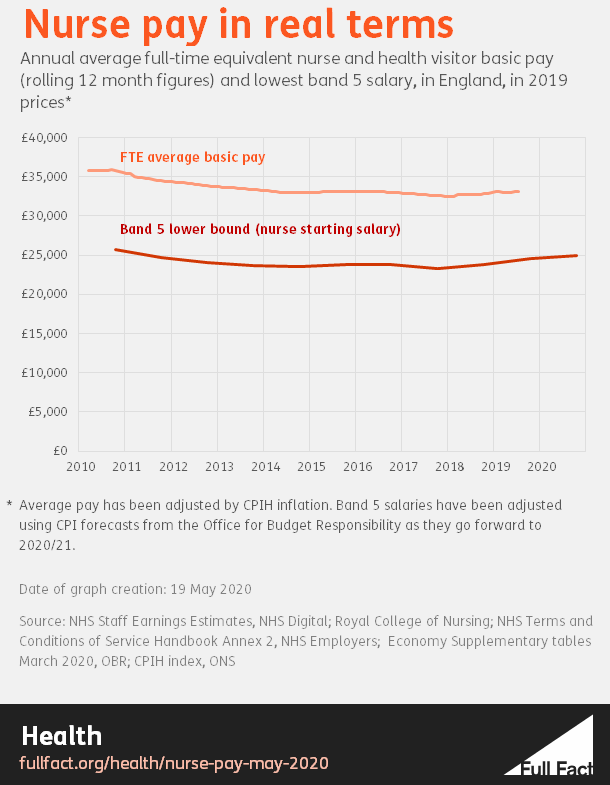