NHS staffing costs continue to make headlines, with both the Daily Mail and Telegraph splashing on the fees paid for some agency staff.

Last week the Secretary of State for Health Jeremy Hunt clashed with his opposition counterpart over the cost of agency staff. Andy Burnham blames this on cuts to nursing numbers during the last Parliament, while Mr Hunt argues that the inquiry into Mid Staffs shows understaffing goes back further.

It's accurate to say the number of nurses fell in the first two years of the last Parliament, before rising again. Numbers were higher at (almost) the end of the parliament than at the start of it. 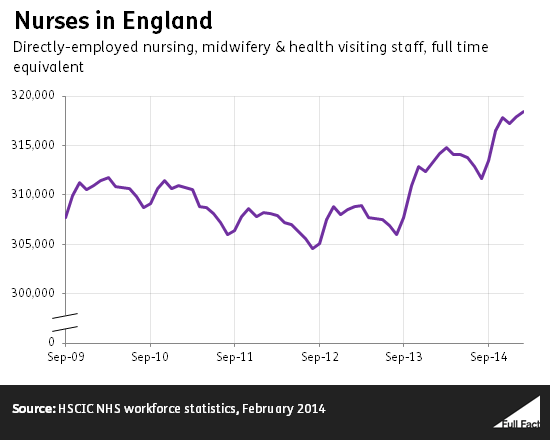 The precise level of this decline, and rise, depends on who you count as a nurse and the time period you use to count them.

Mr Burnham might be comparing May 2010 to another month of 2012 or 2013 in order to get to a drop of 6,000. This isn't a very useful way to look at changes over time because there are seasonal fluctuations every year, as you've already seen show up in our graph. Comparing two different months from separate years is misleading for that reason.

This figure comes from the Royal College of Nursing (RCN), which analysed responses from 168 trusts providing healthcare across England. In the three months from April to June 2012, trusts spent an average of £400,000 on agency nurses. By July to September 2014, that had risen to an average of over one million each. That's a rise of 150%.

There doesn't seem to be a seasonal effect if you compare these particular quarters — according to the RCN's figures spending has been rising pretty steadily, apart from small uplifts in January to March which don't affect the comparison here.

Although we haven't seen the original figures behind the analysis, they match up to separate figures from the bodies that regulate trusts.

Spending on all contract and agency staff (not just nurses) has risen from £2.5 billion in 2013/14 to £3.3 billion in 2014/15, according to figures from Monitor and the Trust Development Authority (TDA). These figures, unlike the RCN's, include temporary staff whose contracts are with the NHS rather than with agencies.

While the figures aren't specifically on spending on nurses, both bodies have mentioned nurse recruitment as one of the areas that's driving the increased spending, a key reason cited by both for more hospitals moving into deficit. Monitor says that the acute trusts it oversees "have consistently cited recruitment difficulties, particularly in qualified nursing and medical staff, and in A&E, Acute Medicine and Care of the Elderly services."

There's also increased demand for nurses. The TDA says "there has been an increase in the number of nursing posts required in response to unplanned activity pressures and a heightened focus on service quality and safety."

"…there is a lot of financial pressure in the NHS, and that is because NHS hospitals took the right decision to respond to the Francis report into Mid Staffs by recruiting more staff to ensure that we ended the scandal of short-staffed wards. As a temporary measure it recruited a lot of agency staff, which has led to deficits…" — Jeremy Hunt, 2 June 2015

The focus on safety mentioned by the TDA has come in the wake of the public inquiry into poor care at Mid Staffs, which found that chronic understaffing at Stafford Hospital played a key part in unacceptable standards of care there between 2005 and 2009 (the period which the inquiry had as its scope).

Following recommendations in the report the National Institute for Health and Care Excellence introduced new guidelines for some NHS settings, and further work on staffing levels is set to be carried out by NHS England. And hospital trusts have been told that they must now publish their plans for staffing levels.