One in four? How many people suffer from a mental health problem

How common is mental illness?

“One in four” is widely cited in the UK as the number of people who suffer from a mental health problem.

The estimate has been around since the 1980s, although a commonly cited source for the figure is the 2007 Adult Psychiatric Morbidity Survey (APMS). This found that 23% of people in England had at least one psychiatric disorder at some point in that year, and a third of these—7.2% of people—had more than one.

Because each condition included in the 23% figure has a different time frame it’s not meaningful to use the data to say this many are ill in every year, or in any other time period. But the findings do suggest that the number suffering over a lifetime will be more than one in four.

The figures are based on whether survey respondents met criteria that indicated certain illnesses and in some cases on follow-up interviews with medical specialists. The methods used vary by condition.

Newer figures are available, but don’t cover the same thing

A more recent Adult Psychiatric Morbidity Survey (covering 2014) was published last year. It doesn’t provide an update on the one in four figure though.

It did report that one in six people in England had a common mental disorder (CMD) in the week before they were interviewed for the study. This, according to the researchers, suggested that around this many could be expected to have a CMD at any one time. These CMDs included things like generalised anxiety disorder, obsessive compulsive disorder and panic disorder.

Since 2000, the proportion of women recorded as having a CMD in England has increased, while in men it has stayed relatively stable.

The study also looked at a number of other conditions including personality disorders, PTSD and drug and alcohol dependency. 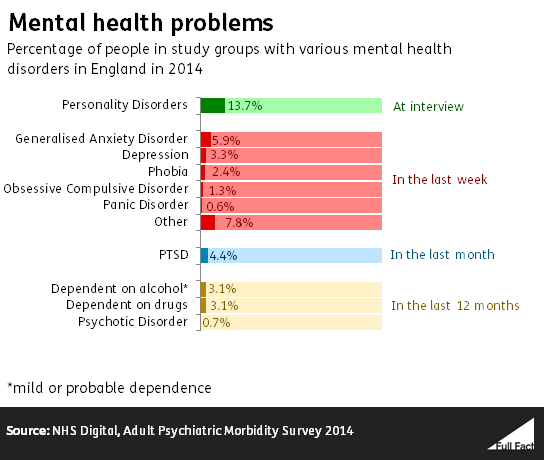 These figures are only estimates, as the researchers point out, and the true proportion of people with the conditions could vary from these findings. However the researchers describe the study as the “most reliable profile available of mental health in England.”

Because both the 2007 and 2014 surveys looked at different disorders relating to different time frames, we can’t attach a time frame to them as a whole.

But the findings from 2007 do suggest that at least a quarter of people, and probably more, will suffer from one of those illnesses in their lifetime. Although three-quarters of the study group were not found to have had any mental health conditions at any point in 2007, some will have previously been ill or will become ill later in life.

That’s based on what diagnoses people report having received, and how they view conditions they’ve had that weren’t diagnosed. There are limitations with this kind of approach because, unlike the APMS, it relies on the perceptions of the people surveyed rather than a systematic attempt at diagnosis by experts.

And, since it’s trying to measure illness experienced across the lifetimes of those surveyed, it’s only as good as the memories of its participants, and in some cases how they self-diagnose their conditions.

There’s some evidence to suggest people can tend to see mental health disorders differently to those designing the surveys. 26% of respondents to a 2013 survey of people in Scotland said they had personally experienced a mental health problem at some point in their life time.

The proportion rose to 32% when asked if a health professional had ever diagnosed them with one or more of a list of 15 different mental health disorders. That suggests some people may not have been aware of the types of conditions that fall under the umbrella term of “mental health problems”.

Other evidence on mental health

Research by David Goldberg and Peter Huxley from 1980 found that one in four people in its sample had suffered some sort of mental disorder in a year. It didn’t look at the same conditions as the APMS (so it didn’t include drug or alcohol dependence for example).

More recent data is available on the numbers who are in contact with mental health services.

But this doesn’t tell you how many people are suffering from a mental health problem, as clearly not everyone who is mentally ill will receive a diagnosis or treatment. Of all the adults who took part in the 2014 APMS one in eight reported that they were receiving mental health treatment at the time of the study.