Correct, although the number of deaths in recent weeks far exceeds the number at the same point in any recent year.

Update: This article was originally published on 24 April, and referred to data from just the first 15 weeks of the year (as did the claim that we were checking).

The original article text follows below.

A Facebook post compared the deaths recorded by the Office for National Statistics (ONS) so far in 2020 with the deaths in 2018. Some readers have asked us to look into this as well.

The Facebook post says that “UK currently to date including today 22 April has exactly 2,760 ‘LESS’ deaths than the exact same period weeks 1-15 in 2018”. The user said that the data came from the website of the Office for National Statistics (ONS).

These numbers refer to deaths in England and Wales, not the whole UK. Also, they were the latest ONS figures available on 22 April, but they only include deaths registered until 10 April. Otherwise, the figures are correct.

Looking at just the last two weeks of data, the number of deaths is far above what it was in any of the past five years.

The number of people who die varies from year to year. The winter months usually see more deaths, but as it happens – perhaps because of the mild winter this year – 2020 saw relatively few deaths in the months before the Covid-19 outbreak started.

Then the number of deaths registered in week 13 of 2020 rose above the number in any of the five previous years. Deaths continued to increase very sharply in weeks 14 and 15. 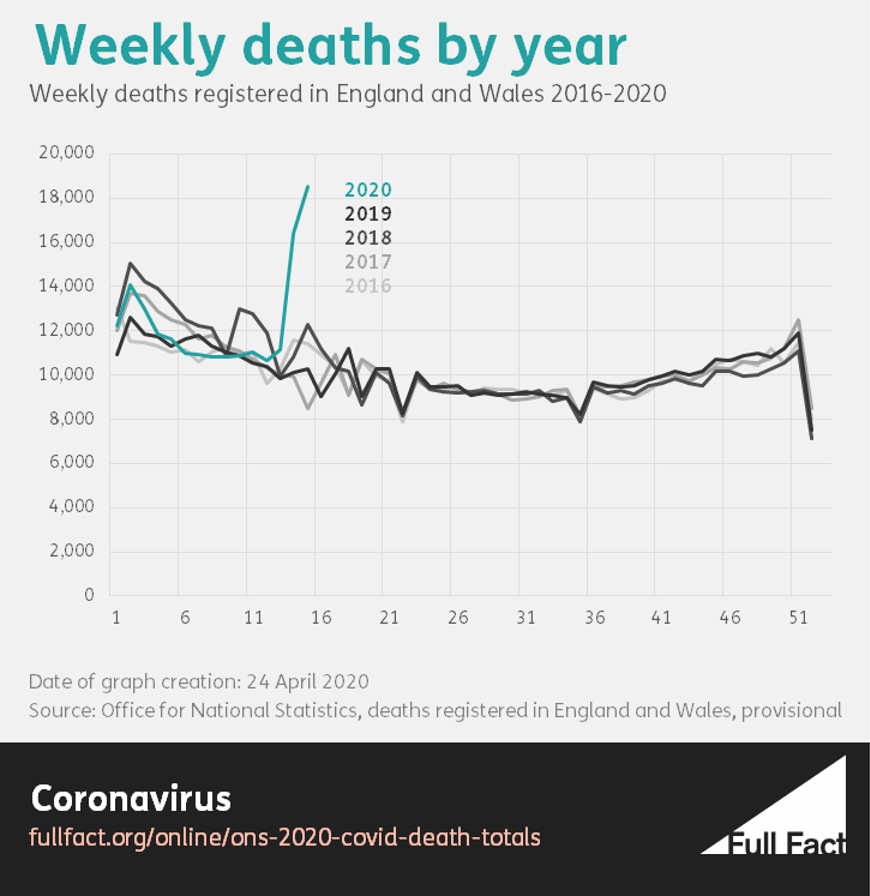 It is likely that the total for 2020 so far will overtake the comparable 2018 figure in the coming weeks.

This article has been changed to correct the numbers inside the brackets in the penultimate paragraph.

This article was updated to include figures from the two subsequent weeks.

This article is part of our work fact checking potentially false pictures, videos and stories on Facebook. You can read more about this—and find out how to report Facebook content—here. For the purposes of that scheme, we’ve rated this claim as true because the figures match the ones for England and Wales, as recorded by the ONS.