43% of health boards in England provide no specialised mental health service for new or expecting mothers.

This was correct in 2014 and is still about right. Updated figures from the Maternal Mental Health Alliance show that 39% of Clinical Commissioning Groups have no community mental health services for pregnant or new mothers. 19% had services which met Royal College of Psychiatrists standards.

This was correct in 2014, according to a report published in that year which the NHS has endorsed. Revised figures from the same researchers show that specialised mental health services for new mothers are now slightly more widespread, but they’re still unavailable in four out of every 10 areas of England.

‘Perinatal’ mental health services are provided to mothers throughout pregnancy and until their child is 12 months old.

The Daily Mail told us that its figure comes from NHS England, which said last week that “more than 40 percent [of areas] provide no service at all.” The NHS also says in its mental health strategy, published in July 2016, that if the areas where community perinatal mental health services don’t meet Royal College of Psychiatrists guidelines are added to those with no service at all, that amounts to 85% of health areas in England.

This is based on a 2014 report, which contained figures from the Royal College of Psychiatrists on maternal mental health coverage. But more up-to-date information is available.

These updated figures show that 39%, or 82 out of 211 Clinical Commissioning Groups (CCGs), did not provide any specialist community mental health services for new mothers across the whole CCG. This is as of December 2015.

That’s not the same as saying that 39% of women have no access to community perinatal mental health services. For example, London has much more such services, so the proportion of women in the population with access to them could be higher than their geographical reach.

It’s important to note that the data refers specifically to specialist community mental health care. The same 2014 report cited by the NHS found that 90% of mothers who were treated for perinatal mental health problems received care from a GP or another primary health care provider.

And the report also notes that its coverage map was put together using information from local experts and has not been independently verified.

Over 60% of areas have a specialised service, but only 20% meet Royal College of Psychiatrists standards

The figures show that only 41 of the CCGs, or 19%, had a specialised perinatal mental health community team that met Royal College of Psychiatrists standards. The remaining 42% ran some form of service but didn’t meet the recommended standard. 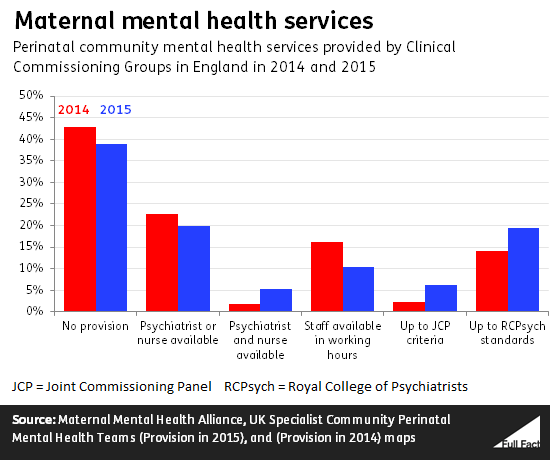 Scotland has a similar number of areas with no specialist community provision, whereas Wales and Northern Ireland have even fewer.

Clinical Commissioning Groups were set up in 2013. They’re responsible for sourcing healthcare services in a particular area of England. CCGs include GPs, nurses and consultants and the care they source includes planned hospital care, emergency care, rehabilitation, most community health services and mental health services.

Another study found only 3% of CCGs surveyed had a strategy for providing perinatal mental health services. 18% were developing one, but 60% had no strategy or any plans to develop one.

The rest either didn’t reply or directed the query to their local NHS Trust. This is based on Freedom of Information requests in 2014 from 194 of the 211 CCGs.

The same study also asked 193 NHS Trusts, which often provide the healthcare services that CCGs purchase, about their perinatal mental health offering. There are currently 210 acute and mental health NHS trusts in England.

It found that 26% provided a service, 3% offered a minimal service, 54% didn’t provide a service and the rest did not respond.

Up to 20% of women experience perinatal mental health problems

Between 10% and 20% of new mothers experience some form of mental health problem either during pregnancy or in the first year of their baby’s life. These issues can include stress, obsessive-compulsive disorders, eating disorders, psychosis and depression.

In up to 50% of cases where mothers suffer from perinatal depression or anxiety it goes undetected, even when they are routinely in contact with medical services, according to a report by the London School of Economics and the Centre for Mental Health.

The issue is in the news now because NHS England has just launched a new Perinatal Community Services Development Fund which it hopes will help to increase the mental health services available to new and expectant mothers.

We updated this article to include the results of the National Childbirth Trust’s Freedom of Information request and information on perinatal mental health problems.