A group of 43 European countries and territories have far more people than the UK, but fewer Covid-19 deaths.

This is correct. Although the list excludes other European countries with high death tolls, such as France, Italy, Spain and Belgium.

A Facebook post compares the UK’s total population and what appears to be its Covid-19 death toll with a selection of other European countries.

The combined population for the other countries is wrong, but its general point—that the UK experienced more deaths despite having a much smaller total population—is true.

However, this simple comparison leaves out some important context and uncertainty, which would give a more accurate picture of the UK’s experience, relative to others.

In particular, the post excludes some European countries with high death tolls, including Spain, Italy and France.

Are the numbers right?

By using UN population data for 2019, we calculate that the 43 countries on the left of the image have a total population of about 496 million, not the 747 million that the post claims. (This is roughly Europe’s total population.) The 68 million figure for the UK is correct.

Confirmed Covid-19 deaths are more difficult to compare between countries, which often record them differently, with different degrees of accuracy and delay. There are also several different data sources that this post’s creator might have used.

By our reckoning, using data from the Our World in Data project at the University of Oxford, a total of 33,602 Covid-19 deaths had been recorded in the 43 European countries listed on May 26, when the post appeared. This is slightly lower than the 34,500 figure quoted in the post. A discrepancy like this might simply be the result of using different data sources.

Our World in Data records 36,914 Covid-19 deaths for the UK on 26 May, which is essentially the same as the 37,000 quoted in the post. This is the highest for any European country at the time, including those not featured in the post.

Which countries are included?

After the UK, Italy, France, Spain and Belgium had the highest confirmed Covid-19 death tolls on 26 May. Including any of them in the ‘Europe’ group would have given it a higher combined death total than the UK’s.

Was the UK hit worse than any other European country?

The UK had experienced the most Covid-19 deaths in Europe by 26 May, but as the post suggests, we can’t compare the severity of outbreaks by total deaths alone, because countries with smaller populations are always likely to experience fewer deaths. Instead we could consider the number of deaths that have occurred per million people, to give a sense of how badly each country has been affected, in terms of its size.

By this measure, on 26 May, the UK was the joint-fifth worst affected country on Our World in Data’s European list, along with Italy, each having recorded 544 Covid-19 deaths per million people.

The worst affected was San Marino, with 1,238 deaths per million, then Belgium (803), Andorra (660) and Spain (580). (It’s important to consider that the total number of deaths in very small countries like San Marino and Andorra are also very small, at 42 and 51 respectively. This means that it takes just a handful of cases to make the national death rate very high.)

The total European death rate on 26 May was 225 deaths per million people.

At the time of writing, using figures from 22 June, the UK still has the highest confirmed number of Covid-19 deaths in Europe. It now has the fourth highest death rate, with 628 deaths per million people.

The total European death rate as of 22 June was 250 deaths per million people. 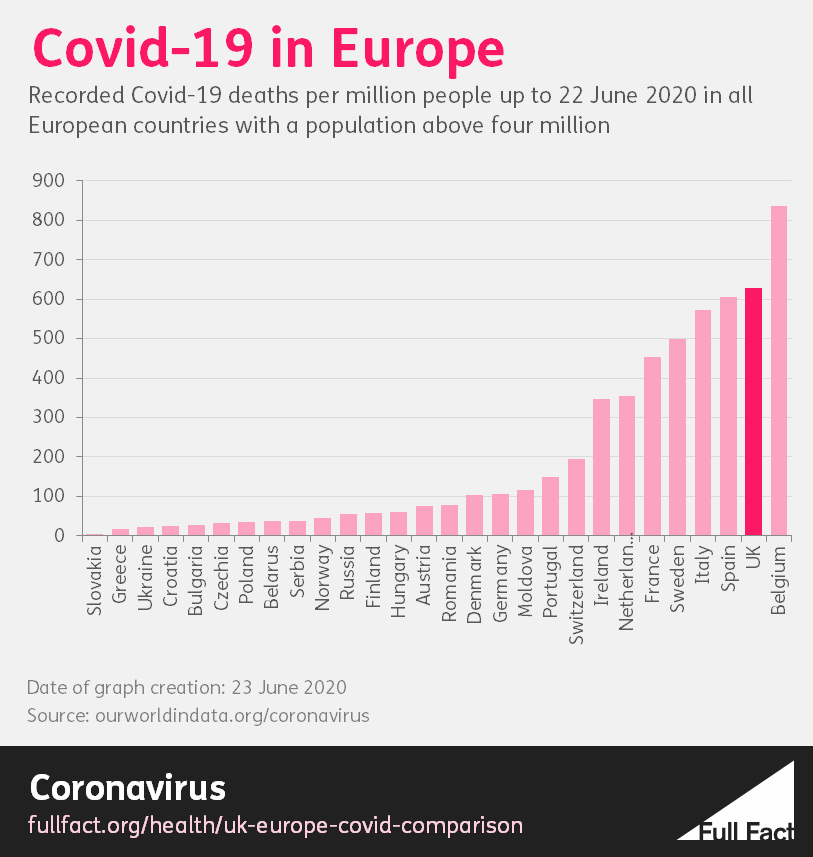 This article is part of our work fact checking potentially false pictures, videos and stories on Facebook. You can read more about this—and find out how to report Facebook content—here. For the purposes of that scheme, we’ve rated this claim as true because the UK does have far fewer people than these countries, and did record more deaths.