The UKIP leader Paul Nuttall has said that he wants to privatise the NHS.

Mr Nuttall has been critical of the NHS model of a publicly-owned healthcare provider in the past. He has since said that he thinks there could be more private sector involvement in the NHS. UKIP’s policy is still for an NHS that’s free at the point of use.

“I’d just like to direct this to the Deputy Leader of UKIP. Your leader, Paul Nuttall, said that he’d like to privatise the NHS.”

“He actually praised the Tories for bringing ‘a whiff of privatisation’ into the NHS.”

UKIP’s newest leader, Paul Nuttall, had this to say about the NHS a few years ago: 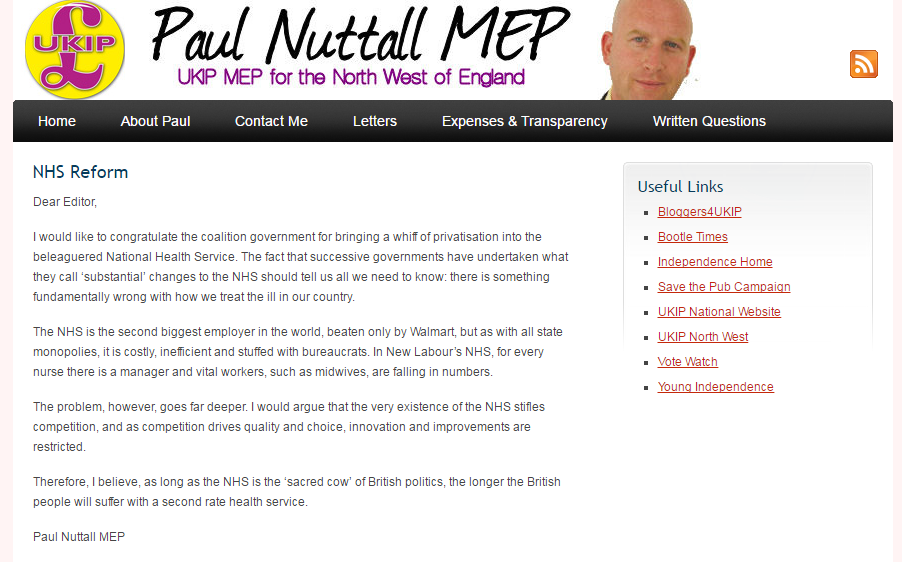 This was apparently a letter to the Telegraph that was also posted to Mr Nuttall’s website. It has since been deleted.

He also said in 2011 that "I believe that the NHS is a monolithic hangover from days gone by... quite frankly I would like to see more free market introduced into the health service”.

When this clip was played to him on Sky News recently, Mr Nuttall responded as follows:

“What I have said about the NHS is simply this: I believe it needs to be streamlined. It cannot be right that 51% of people who work in the NHS in England are not clinically qualified, it’s too big, it’s cumbersome. What I do believe we could have more free market in is in places like procurement whereby the NHS itself is paying sometimes ten to thirty times over the odds for drugs. If you brought in a private company you could hire and fire them on results that they got for the British public.”

His deputy, Mr Whittle, pointed out that NHS privatisation has never been official party policy.  The party’s 2015 election manifesto called the NHS a “cherished institution”, and addressed “growing concern” that a EU-US trade deal being negotiated would mean “privatising significant parts of our NHS”.

The party’s health policy for that election began with “keep the NHS free at the point of delivery”.

It’s possible to still have that and have private sector involvement in the NHS. It just depends what we mean by “NHS privatisation”. Private firms can already bid to do work on behalf of the NHS. In that sense, a portion of the service is already “privatised”.

"Privatisation" could also mean moving away from the existing system to a health insurance model, as former UKIP leader Nigel Farage once advocated.