Nearly 99% of Covid-19 patients who are vitamin D deficient die, according to a research study.

A study from Indonesia did claim to show this, but there are problems with the study methods that mean it doesn’t prove this is the case. The paper has now been removed by the authors from the online research library it appeared on.

“Nearly 99 per cent of Covid-19 patients who are vitamin D deficient die, according to a terrifying study”

“The results revealed 98.9 percent of infected patients who suffer with a vitamin D deficiency lost their lives to COVID-19”

The Mail Online and the Daily Express have claimed that a new study has found that 99% of Covid-19 patients who are deficient in vitamin D die.

But this conclusion cannot be made based on what is reported in the study.

It is true that among participants with deficient vitamin D levels in the study, 99% died. However, there is no indication that the people in this study were representative of the wider population, so no conclusions about vitamin D levels and Covid-19 outcomes in general can be drawn from the findings.

Notably, this research was published as a preprint (meaning it was yet to be reviewed by other scientists) and has now been removed from the journal’s website by the authors.

The headline of the Daily Express article also incorrectly claims  “Lacking in a vitamin could increase death risk by 99 percent”.

Where has the study gone?

This preprint was originally published on SSRN, an online research library which “provides the opportunity to share and distribute research well before it is published in journals”, on 30 April 2020.

SSRN said the paper was the fifth most downloaded paper on the website between 8 and 14 June. However, the preprint then disappeared from SSRN’s website after 19 June.

We asked SSRN why the research was removed and it told us that “the paper was removed from our site by the author”. We have contacted the authors to find out why they decided to remove the article, but they are yet to respond.

The study is still available to read in full on the website of dental product manufacturer Emerginnova’s website, but has not been peer-reviewed there either.

What does the study show?

The study, based in Indonesia, looks at the differences between 380 people who died and 400 who did not die after catching SARS-CoV-2, the coronavirus that causes Covid-19. The study does not report how these people were chosen for inclusion in the research.

The main focus of the paper is patients’ vitamin D levels. Each patient was assigned to one category (normal, insufficient or deficient) based on “pre-admission” serum levels, which were “checked by two physicians based on the available clinical data of the patients”.

It is unclear how far back vitamin D levels were recorded or what happened if participants were missing this information.

If these statistics are viewed by vitamin D level rather than survival status, then we see that about 99% of patients in the study who were recorded as vitamin D deficient died. The authors write that “98.9% of Vitamin D deficient cases died while only 1.1% of them were active [alive] cases”. 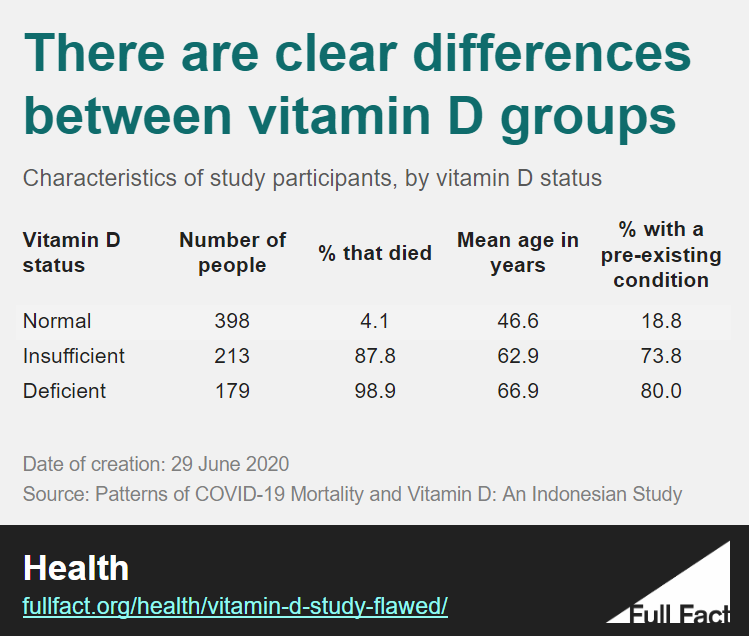 The authors provide the average age and percentage of people with a pre-existing condition by vitamin D status. From this, we can see that those with deficient levels of vitamin D are older and far more likely to have other underlying illnesses.

This means that the group of people who died with Covid-19 were characteristically different from those who did not die.

There are other risk factors associated with lower vitamin D levels and poorer Covid-19 outcomes that are not measured in the study, such as ethnicity and obesity. Males are more likely to die from Covid-19 but, although sex was recorded in the study, the authors don’t present this information by vitamin D status.

Because these other risk factors weren’t accounted for in the study, we can’t tell from the study whether vitamin D deficiency does affect the chances someone has of dying from Covid-19.

The study certainly cannot be used to say that 99% of Covid-19 patients with a vitamin D deficiency will die of the disease.

There is no strong evidence at present to suggest that vitamin D helps to prevent or limit Covid-19 illness.

A rapid evidence summary by the National Institute for Health and Care Excellence (NICE), the body that provides national guidance and advice to improve health and social care in the UK, has concluded that “there is no evidence to support taking vitamin D supplements to specifically prevent or treat COVID‑19”.

NICE also advises that “all people should continue to follow UK Government advice on daily vitamin D supplementation to maintain bone and muscle health during the COVID‑19 pandemic”.

We got in touch to request a correction regarding a claim made in the Express.

They deleted the article.

We got in touch to request clarification regarding a claim made in the Daily Mail.