The Department of Health says this figure comes from Health Education England. We’ve asked them for more information.

We don’t have figures specifically for the numbers of nurses working on our wards. This figure refers to the increase in the number of nurses working in acute, elderly and general wards for adults. It misses out nurses who work in other types of wards – for example mental health, or those who work in the private sector, but are commissioned to work for the NHS.

Correct, according to figures from the Nursing and Midwifery Council.

“More nurses and midwives are leaving the profession in the UK than joining it, for the first time since 2008, figures show. The number registered in the UK fell by 1,783 to 690,773, in the year to March…

A Department of Health spokeswoman said: "We are making sure we have the nurses we need to continue delivering world-class patient care - that's why there are almost 13,100 more on our wards since May 2010 and 52,000 in training.”

It also says that the number of people registered with the NMC decreased by another 3,264 between April and May 2017.

That represents a shift from the trend in recent years. Between March 2013 and March 2016 the number on the register increased by just over 17,000.

But looking just at people who are joining the register for the first time (rather than people who have been on the register for a number of years or who are re-joining) the trend is slightly different. The number of people joining from the EU has decreased in 2016/17 for the first time in at least the last five years. Meanwhile the numbers initially joining from the UK and Overseas has continued to increase.

The NMC surveyed just over 17,000 nurses and midwives who left the profession last year and asked why they left. Of the 4,500 responses it received around half said they had retired. Of those who hadn’t retired, the top three reasons for leaving were: workload, changing personal circumstances and “disillusionment with the quality of care provided to patients”.

The NMC told us that these figures were only based on those who chose to respond, and weren’t weighted for how closely they reflected the overall register. So they might not be representative of all nurses who left last year.

The NMC couldn’t tell us how the numbers of nurses and midwives it has registered relates to the numbers working for the NHS. It told us it doesn’t collect this information.

Nurses on our wards

The government isn’t quoting numbers for all nurses here. They are referring specifically to nurses working on acute, elderly and general wards for adults in England.

There were almost 13,100 more full-time equivalent nurses working in these types of wards in March 2017 than in May 2010. That doesn’t include those nurses who work in other areas such as mental health or on children’s wards.

These figures aren’t necessarily directly comparable as nurse numbers change from month to month. But looking back to March 2010 doesn’t change the comparison that much—there are 13,000 more nurses in March 2017 compared to March 2010.

These nurses on acute, elderly and general wards account for around 61% of all nurses and health visitors working in hospitals and community health services in England—as of March 2017. But the government was specifically referring to nurses working “on our wards” and not all nurses and health visitors will do this. Community health nurses, for example, would not normally be expected to work on a ward.

Overall the number of nurses working in hospitals and community health services has increased by around 3,900 since March 2010. 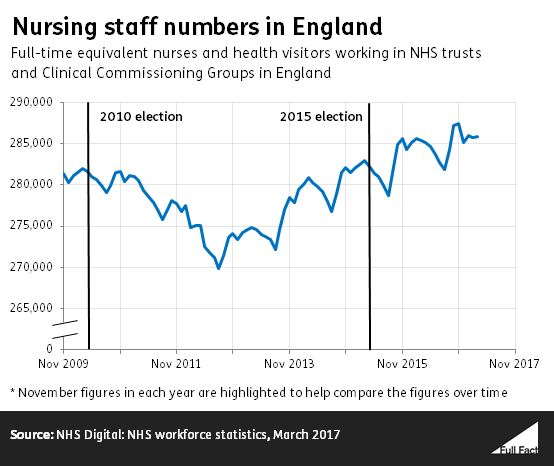 Some types of nursing have seen a drop in numbers though. There are around 2,000 fewer nurses working in learning disabilities since March 2010 and 3,600 fewer working in maternity services.

Nurses working in other areas

Nurses also work in other sectors of healthcare. There were almost 15,800 full-time equivalent nurses working in GP practices across England in September 2016 (the latest figures available).

At the same time there were over 11,000 full-time equivalent nurses and health visitors working in independent sector healthcare—many of whom are commissioned to provide services for the NHS. Because of issues with the way this data is collected NHS Digital, which publish the figures, say they shouldn’t be compared with other types of nurses.

The Department of Health told us that the figure of 52,000 nurses in training comes from Health Education England (HEE)—the body responsible for education and training of NHS staff. HEE confirmed this was the case and told us that it relates to nurses working with adult, children, in mental health and learning disabilities and any nurses with dual qualifications.

We’ve asked Health Education England where and whether this figure is published.

HEE also told us that the numbers of nurses in training have increased each year over the last three years.

Earlier this year the Royal College of Midwives said there was a shortage of 3,500 midwives across England.

We updated this article with more information from the NMC and HEE.