Where does councils' money come from to pay for adult social care?

Public spending on social care in England isn’t allocated in the same way that spending on something like health is. It’s also not provided completely free at the point of care like the NHS or schools.

There are 152 councils in England responsible for providing social care to their residents. Each one pays for the social care services it provides from within its own budget. The money councils have to spend on all the services and functions they provide comes from three main sources: council tax, business rates and money directly from the government.

How much is spent?

Councils spent just over £16 billion on adult social care in 2015/16, according to the Institute for Fiscal Studies (IFS). That’s including money councils get from the NHS and minus any money they make from providing social care. 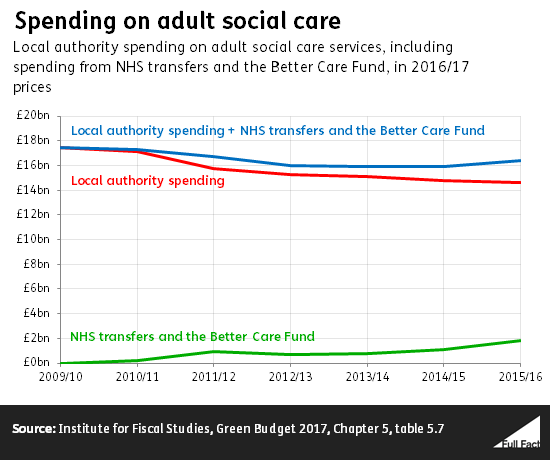 Between 2009/10 and 2015/16 council spending on social care has decreased by almost 17%. But if you include the money they get from the NHS and the Better Care Fund, the decrease is much less at around 6%.

If you just look at councils’ own spending, and don’t include the NHS money, then around 13% of councils’ spending was on adult social care in 2015/16. 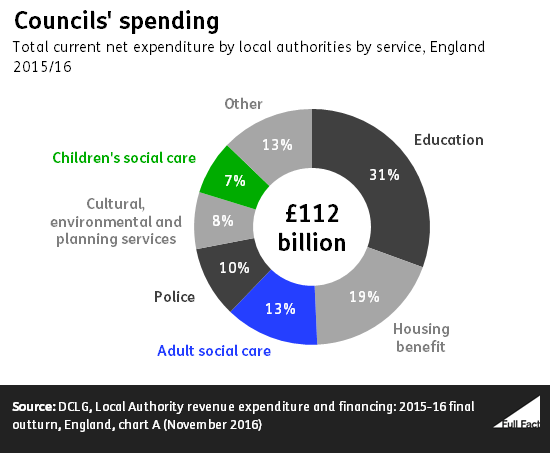 Most of this money isn’t ring-fenced, meaning councils don’t have to spend specific amounts on social care. However, there are several ways that councils can get money to pay for social care that are ring-fenced.

Some of the money comes from increasing council tax

However, at the end of last year the Chancellor announced that council taxes could be raised by 3% in 2017/18 and again in 2018/19. There is a limit to how much councils can raise the adult social care precept altogether though—councils that raise it by the maximum of 3% in these years won’t be able to raise it at all in 2019/20.

So councils aren’t able to raise more overall than they were before, they’re just able to get more of the money sooner.

Using these powers councils raised £382 million last year, although not all councils used it. Of the 152 councils responsible for social care in England there were eight who chose not to use it at all.

It’s now expected that the 3% council tax rise will raise £1.7 billion a year for social care by 2019/20. Not all councils will be able to raise the same amount though and councils that are less wealthy are thought to have more people who require adult social care.

We’ve written more about how these changes affect your council tax bill here.

How this extra money will affect councils’ spending on social care is unclear. In theory they could keep their overall adult social care budget at the same level as last year and add on the money from the precept. In practice, the IFS has warned that councils could just use the extra money to free up money for other services.

So whether adult social care funding goes up or down depends on what councils decide to do.

Some of the money comes from the NHS and government

In recent years some money for social care has been transferred to local councils from the NHS. This has now become part of the Better Care Fund. The fund pools existing money which the NHS has to spend on social care and government grants that local authorities had also been given to improve it.

This money is supposed to be spent on improving integration between health and social care. Councils’ plans for the Better Care Fund include spending it on providing community beds. The aim of this is to prevent people from having to go into hospital and for when they do end up in hospital, to set up care so that they can be discharged more quickly than would otherwise be possible.

Other plans include increasing the proportion of patients with a verified NHS number across the area in order to improve data sharing between organisations.

In 2017/18 the government will also contribute more money to the fund. This will total £1.8 billion extra a year by 2019/20. This includes money recently committed by the government in the March 2017 budget, which gives adult social care more money in the short term, though experts have warned that more is needed.

Having said all that, the NHS does pay for some care directly if “a person’s primary need is a health need” and covers care in settings like “a care home, hospice or a person’s own home”. In 2015/16 the NHS spent around £3 billion on these services.

Councils also receive money for social care through grants like the adult social care support grant which comes into place later this year and is going to amount to £240 million. However, the IFS has described this as a “relabeling of money councils were going to receive anyway” as it comes from a reduction in money councils are going to get to build new homes.

Some of the money comes from charging for services

Also unlike the NHS, adult social care is not generally free at the point of use. Councils receive some money back by charging for the social care services they provide. Once a council has determined whether or not someone is in need of social care, they have to work out who should pay for it, either the council or the individual.

The rules differ depending on the type of care someone needs. For example, if someone needs a place in a residential care home the council will pay the full cost of this if the person has less than £14,250 (that includes the value of any property they might own).

From 2020 the government has said it will put in place a cap on the costs someone should pay for their own social care.

All of the charges to patients for social care provided by councils amounted to £2.6 billion in 2015/16.

We updated this piece to clarify details of the NHS contribution to the Better Care Fund. We also corrected the amount the NHS spends directly on adult social care—originally this was stated to be £416 million which was the amount set aside for the future in 2015/16 rather than total spending in that year.