The British public believe that 7% of the UK population has died from Coronavirus, a number 100 times higher than the recorded-death reality.

This uses a mean average which isn’t appropriate in this context. Using the median, the average Brit thought that 1% of the GB population had died of Covid-19.

Last week, Twitter was awash with claims about how many people the British public think had died from Covid-19.

“Scottish people think COVID-19 has killed 10% of the U.K. population,” said Toby Young. “The British public believe a whopping 7% of the UK population has died from Coronavirus, a number 100 times higher than the recorded-death reality,” reported blog Guido Fawkes.

The true proportion of the British population who have died from Covid-19 is around 0.1%.

The problem was that the way the data had been reported, using a mean average, rather than a median, misrepresented what the public really thought about the death rate.

But sometimes the mean isn’t a suitable measure of the typical or the average. In particular it’s not suitable when you have either a very wide range or a very skewed distribution of data.

The median is better than the mean as an average of income, because while the mean would be skewed by outlier results (like the £1 million in the example above) and so wouldn’t really represent a typical income, the median limits the impact of particularly high or low numbers.

In the case of this survey on the Covid-19 death rate, people were asked: “Which percentage of the population in Great Britain do you think have died from coronavirus?” 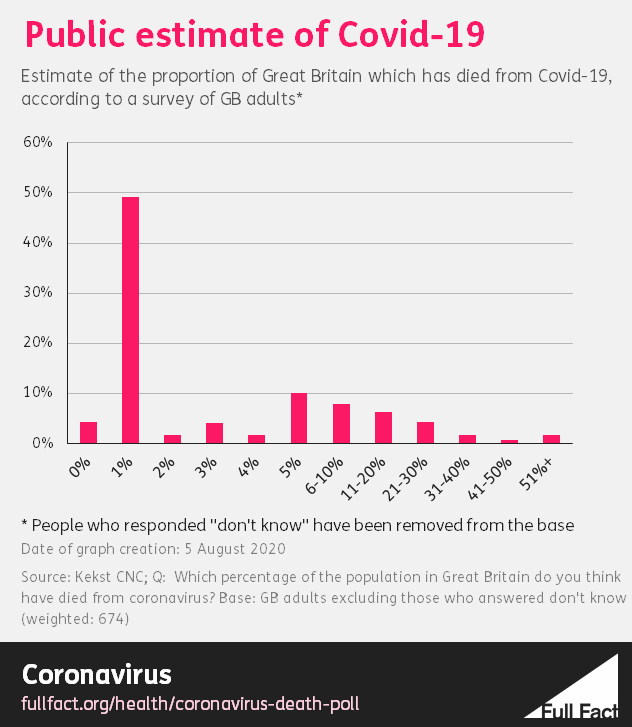 While most people said that fewer than 2% of the population had died, the few people who answered with high figures skewed the mean upwards.

So, to take Guido Fawkes’s article, 7% doesn’t really represent what the average Brit thinks the coronavirus death rate has been.

The median average answer was around a 1% death rate (we can’t say what the exact median answer was without the raw data which we have asked Kekst CNC for). Almost half of respondents who estimated a death rate said it was around 1%.

While there are undoubtedly some people who are significantly overestimating the Covid-19 death rate, a mean average gives them more voice than people who gave more realistic answers.

The data was also broken down for each of the three nations in Great Britain. The median average for Scotland was also around 1%, far from the mean average of 10% that was reported (though only 93 Scots were surveyed, and with such a small sample size this is only a very rough guide as to the Scottish public’s perception).

At the time of the survey around 44,000 in Great Britain had died after testing positive for Covid-19, with the vast majority of these deaths having been caused by the disease.

The true death toll may be higher still, given the potential for some Covid-19 deaths to have not been categorised as such.

That means about 0.1% of the population of Great Britain has died from Covid-19, rounding to one decimal place.

So the median average of people thinking the death rate is about 1% is still likely an overestimate, but to a lesser extent than the mean average.

The original version of this article said that the poll question included a preset list of answers starting at 0% and 1% for respondents to choose from. It suggested that this may have led some people to overestimate the true percentage of around 0.1% by not allowing for answers in between 0% and 1%. This was incorrect. The poll allowed people to enter whatever figure they wanted, including decimal points. We apologise for the error.