Is a young person diagnosed with an STI in England every four minutes?

Every four minutes a young person in England is diagnosed with gonorrhoea or chlamydia.

In 2017, there were 144,000 diagnoses for those aged 15-24 in England or the equivalent of one every four minutes. That’s not the same as the number of people diagnosed, someone might get diagnosed more than once, or with several STIs.

“A young person in England is diagnosed every four minutes [with gonorrhoea or chlamydia].”

There were around 144,000 diagnosed cases of the sexually transmitted infections gonorrhoea and chlamydia in people aged between 15 and 24 in England in 2017. That’s equivalent to just over one diagnosis every four minutes.

Chlamydia is the most commonly diagnosed STI

Chlamydia is the most commonly diagnosed sexually transmitted infection (STI) in England, with 203,000 diagnoses (for people of all ages) in 2017. Genital warts  was the second most common with 59,000 diagnoses, and gonorrhoea third at around 45,000. Public Health England also publishes data on the number of diagnoses of other STIs, like genital herpes and syphilis, for different age groups.

Among 15-24 year olds in England last year, there were 144,000 diagnoses of gonorrhoea and chlamydia, or about one every four minutes.

If you look at all five of the STIs named above, there were around 185,000 diagnoses in England in 2017 for those aged 15-24. That’s closer to one diagnosis every three minutes.

We’ve not included HIV here, as it isn’t exclusively transmitted by sexual contact.

Including diagnoses for things like HIV, shigella, scabies and other infections that aren’t only sexually transmitted, there were 210,000 new diagnoses in 15 to 24 year-olds in 2017.

These figures are for diagnoses, not people

There are also likely to be people with STIs who haven’t been tested or diagnosed yet. Cases of some STIs (especially chlamydia) can be symptomless so it may take a while for someone to get diagnosed.

The number of diagnoses can only tell us so much about how common a disease is. To really get an insight we need to look at the rate of infection, or how many diagnoses there were per person in the population.

Is it getting better? 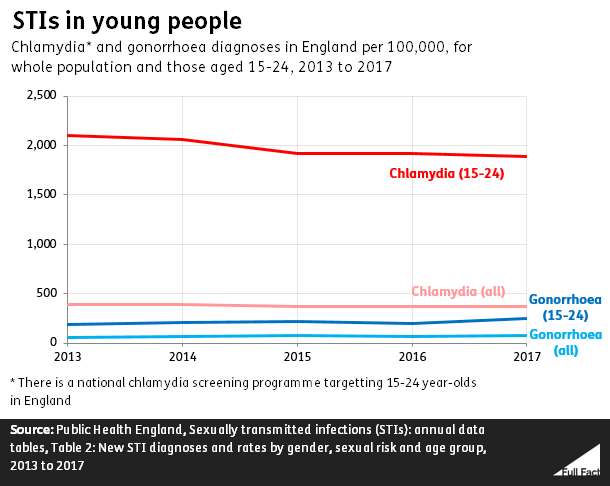 There is a national chlamydia screening programme in England, and in 2017, 1.3 million chlamydia tests were done by 15-24 year-olds, which is down 8% on the year before.