7 factchecks from the PM's immigration speech

Full Fact appeared on BBC Radio 2's Jeremy Vine show today to talk about the numbers behind David Cameron's immigration speech. The Prime Minister wants EU migrants to wait four years to be able to claim some benefits, and warned that if his concerns "fall on deaf ears" then he will "rule nothing out" - alluding to a possible UK withdrawal from the EU.

Here are some of the facts behind the PM's speech we discussed, and a few more too.

"[People] want control over who has the right to receive benefits"

5.3 million people in the UK claim the main out of work benefits, 395,000 (7%) were non-UK nationals when they registered for an NI number (though some of these have an unknown nationality).

The drawback of these figures is they only count people's nationality at the point they registered for a National Insurance number (which could have been years ago). Their nationality could have changed in the meantime.

From the same figures, 12% of Jobseeker's Allowance (JSA) claimants, 6% of Employment and Support Allowance (ESA) and incapacity benefits claimants and 8% of Lone Parent benefit claimants are non-UK nationals (or have unknown nationality).

A compilation of the figures has been put together by the House of Commons Library.

"our National Health Service, which would grind to a halt without the hundreds of thousands who have come from overseas to help run it."

"Even at the end of the so-called boom years, there were around five-million people in our country of working age but on out-of-work benefits."

In the early 2000s, prior to the economic downturn in 2008, there were between 4.5 and 5 million people claiming a key out-of-work benefit: Jobseeker's Allowance, Employment and Support Allowance, Incapacity Benefit, Severe Disablement Allowance, Lone Parent and other income-related benefits.

In May this year, that figure was closer to four million (excluding a small number of Universal Credit claimants).

"And this was at the same time as the last government enabled the largest wave of migration in our country's history ...

"Over the last ten years, immigration to the UK has soared, while the number of Britons going to work abroad has remained roughly the same." 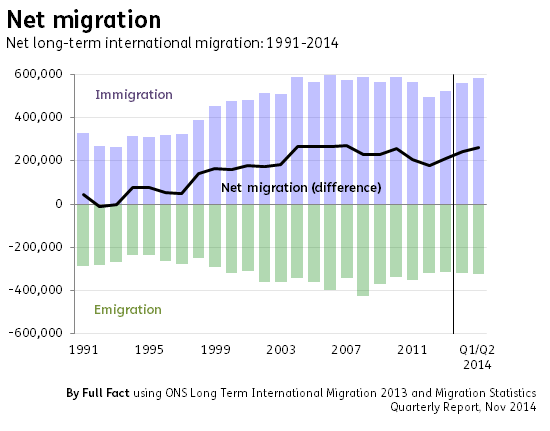 Immigration hit historically high levels in the early 2000s. Although the figures haven't yet returned to their 2005 peaks, the levels remain similar under the Coalition.

"The gross figures are that 8.3 million people came to the UK as long-term migrants in the thirty years leading up to 2004. And a further 4 million came in the next seven years."

Between 1974 and 2003 8.4 million people came to the UK as long-term migrants, and just over four million up to 2010. Another two million have come to this country since the election.

A wider point to consider is the impact on the size of the UK population. Net migration accounted for the majority of population change in the 2000s, the rest being a result of births minus deaths ('natural change'), although some of those births will have been to immigrant parents.

"whereas in the past the majority of the growth in employment was taken up by foreign nationals last year two thirds of that growth benefited British workers."

It's good to see the Prime Minister adjusting a previous, inaccurate claim about the proportion of 'new jobs' that go to foreign workers. As we've made clear, the figures from the ONS don't say anything about 'new' jobs, just the change in employment over a period. It can still be confusing to take proportions of a 'net' figure though, since if UK employment were to rise and non-UK employment fall, it would mean UK nationals account for 'over 100%' of the growth.

"And let me be clear: the great majority of those who come here from Europe come to work, work hard and pay their taxes. They contribute to our country."

We reported on a recent study by University College London which tried to estimate the contribution of recent immigrants to the public finances, as well as immigrants resident in the UK since 1995 (who could have arrived much earlier in the 20th century).

Recent arrivals from the EU were estimated to have contributed £20 billion more to the public purse than they'd taken out in social security, although the positive contribution was much lower looking at immigrants resident in the UK over the longer period.

This and other similar studies are trying to put numbers on something extremely difficult to measure, and its worth bearing in mind that figures like these are based on a lot of assumptions, some of which have been questioned elsewhere.