"There's lots of media about refugees being predominantly male. Any actual facts on this please?"

"I was just wondering if you had any facts in regards to the amount of men refugees vs women/children?"

A few readers have asked us to check whether it's accurate to say that refugees are predominantly male.

The majority of the 400,000 first-time asylum applicants to EU countries over the first six months of this year have been male. 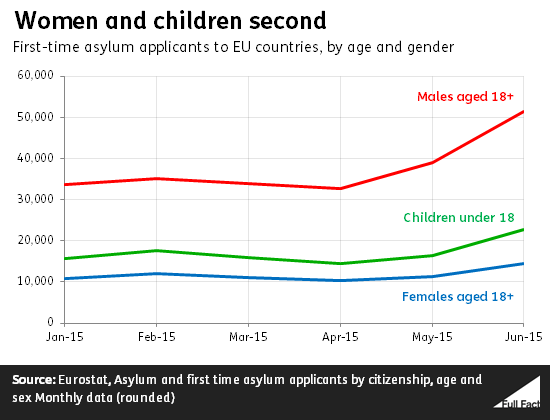 The figure for children covers those listed on a parent's or guardian's asylum application, as well as those who applied by themselves, as 23,000 children did in 2014 (we don't have a breakdown for this year).

Looking only at those over the age of eighteen, just under four out of every five applicants were male in June 2015, the latest month for which we have complete data.

These figures wouldn't include any irregular migration (entering a country without legal permission) by people who don't go on to seek asylum, and don't cover the reported surge in migrants entering Europe since the end of June. On that point, though, the United Nations estimates that of all the migrants arriving in the EU by sea this year, 69% have been men (as of late September).

In the refugee camps around Syria, where there are over 4 million registered refugees, the gender split is around 50:50 according to the UN.

We added an overall gender split, and the words "of both genders" to our overall verdict.

We added a more up-to-date estimate from the UN covering all migration to date.