Foreign national offenders: in prison or leaving the country?

"Over the period of 13 years of the last government, the number of foreign national offenders in prisons doubled. Since we came to power in 2010 that number has started to drop"

"Between 2009 and 2012, the number of people being deported actually got less by 18% ... So when ministers claim today that there are fewer foreign nationals in our prisons, that's because fewer are coming in; fewer are being convicted, not because they're being effective at dealing with the backlog"

The Public Accounts Committee reported this morning on the National Offender Management Service's  "frustratingly poor" performance in reducing the number of foreign prisoners in England and Wales.

The government has little direct control over the prison population, but removing foreign national prisoners is one of the few ways it can make a difference, the MPs pointed out.

Margaret Hodge - the Chair of the Committee - is right to point out a fall in prisoners being removed at the same time, although the published data doesn't say exactly how many of these have been deported (a subset of removals).

Foreign national prisoners up under Labour

At the end of June 2010 (the closest point to the election we have figures for) there were 11,135 foreign nationals serving in prison, making up 13% of the 85,000 prisoners in England and Wales at that time.

As at 31 March 2013 (a while ago, but still the latest published estimate) this had fallen to 10,725, but again: so has the number of prisoners. The rate is roughly exactly the same: 13% of prisoners are foreign nationals.

So there are fewer foreign national prisoners, but the change isn't particularly large.

But fewer are being removed

We use the word 'removed' rather than 'deported' for a reason: they aren't the same thing. Deportation is a particular type of removal from the country that can only happen after criminal convictions or when it's judged to be in the public interest. 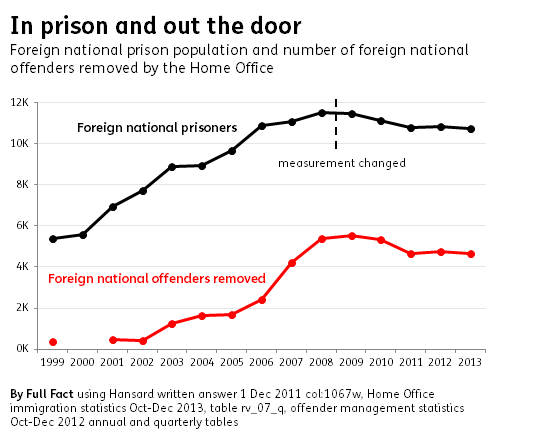 They show that fewer offenders are being removed from the country each year: about 4,700 each year since 2011 compared to between 5,300 and 5,500 in the years prior to the election.

Those who aren't removed will show up in the prison population figures, provided they've been given a prison sentence (which will almost always be the case if it's a deportation).

So Margaret Hodge is right to point out these will have an impact on the figures, but the published data doesn't tell us exactly by how much.