Are our prisons "filling up with foreigners"?

Prisons are filling up with foreigners.

About one in eight prisoners in England and Wales is a foreign citizen. The percentage has been falling over the last few years.

“Our prisons are filling up with foreigners”

Foreign citizens make up 9% of the general population and 12% of the prison population in England and Wales.

Around 5.2 million people were citizens of another country in 2015, according to estimates from the Office for National Statistics.

That estimate can be set alongside the headcount of prisoners in English and Welsh jails, which records just under 10,000 foreign national prisoners as of June 2016. 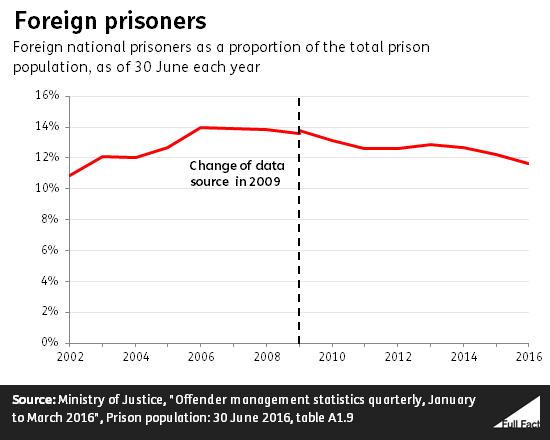 The Ministry of Justice does note that the latest fall is “due mainly to the withdrawal of Home Office commissioned places at Dover [Immigration Removal Centre] in November 2015”.

There are no readily available figures for those in prison who are born abroad.