Has the UK only taken in 216 Syrian refugees?

The UK has taken in only 216 Syrian refugees.

The UK has taken in around 5,000 Syrian refugees. The 216 figure refers to an additional number resettled from around Syria under one particular scheme.

Today's papers are dominated by images of a drowned Syrian child. It serves as a reminder that behind the numbers thrown around in the increasingly heated asylum debate are human lives.

From the beginning of the Syrian crisis in early 2011 to the second quarter of 2015, the UK granted asylum or another form of humanitarian protection to just under 5,000 Syrians in the initial decision made on their application.

In addition to those people, 216 Syrian refugees have been resettled in the UK

The figures above refer to people granted asylum after arriving in the UK. In addition to these people, the UK has taken in 216 people under the Syrian Vulnerable Persons Relocation scheme.

One of a number of organisations concentrating on this figure is the Refugee Council. 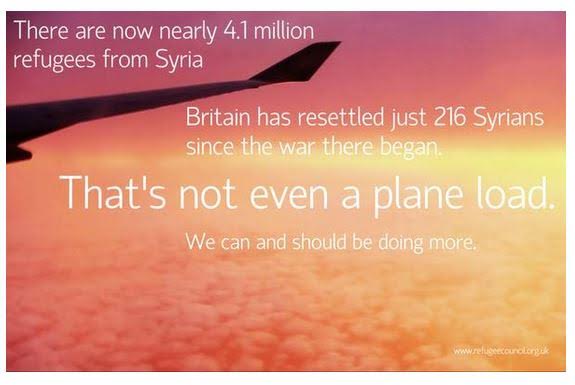 A person must be in the UK to make an application for asylum for themselves and their dependents. However, the most vulnerable people may not be capable of undertaking the journey from Syria to the UK, or may have dependents that can't make that journey.

The Vulnerable Persons Relocation scheme gives Syrian refugees a chance to be resettled in the UK. It focuses on transferring refugees from the region of Syria to the UK.

The scheme targets the refugees "at greatest risk", where "evacuation from the region is the only option", according to the government. It says that particular attention is paid to survivors of torture and violence, or women and children who need medical care.

The scheme was launched after the UN refugee agency asked countries to take in 130,000 Syrian refugees above and beyond their ordinary asylum intake.

On that measure, the UK's 216 to date compares to 35,000 places made available by Germany, but other EU countries have taken in similar numbers to us.