How many child asylum seekers are found to be adults?

65% of assessed child refugees coming to the UK were actually adults.

Correct, but most child asylum seekers are not challenged about their age.

One in eight refugees who claimed to be children arriving in the UK were in fact adults.

This is correct for unaccompanied child refugees, but is an overestimate of the proportion of all child refugees found to be adults.

“Nearly two thirds of supposed child refugees who were challenged about their real age after coming to Britain were found to be adults.”

“65% of assessed "child refugees" coming to UK were actually adults.”

“A new report has found that at least one in eight refugees who claimed to be children arriving in the UK were in fact adults.”

It’s correct to say 65% of assessed children applying for asylum are found to be over 18, but most children going through the asylum process  who say they are under 18 are not challenged about their age in the first place.

One in eight is an overestimate for the proportion of children applying for asylum who are later found to be adults. It only takes the number of unaccompanied children seeking asylum found to be 18.

In 2016 the Home Office received around 9,800 applications for children seeking asylum in the UK. In the same year it decided around 580 cases where the age of a child was disputed (as they were thought to be over 18) and in 370 (61%) it was decided that the child seeking asylum was over 18. 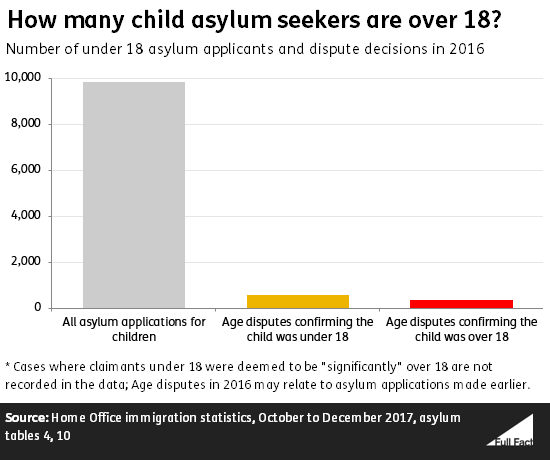 The 65% figure quoted in the media comes from a report by the Independent Chief Inspector of Borders and Immigration which says:

“Home Office data indicated that between 1 July 2016 and 30 June 2017 it had received 2,952 applications for asylum from unaccompanied children.

The Chief Inspector’s office confirmed to us that 65% refers only to assessed unaccompanied children. The Home Office figure for all assessed children found to be adults in 2016 (the last year for which we know the total number of children seeking asylum) is similar – 61%.

There are some health warnings attached to the quality of these data sources, and their comparability.

Finally, there is some doubt over the quality of the asylum figures. The Chief Inspector found inconsistency in whether or not applicants who looked “significantly” over 18 (and were subject to an immediate decision on their age and not a formal age dispute) were recorded in the statistics.

The one in eight figure appears to be an over estimate

But, it’s incorrect to say this is the proportion of “child refugees” who are found to be adults, as the figures only relates to unaccompanied children seeking asylum, not all children.

As mentioned above, in 2016, there were around 9,800 applicants and 370 age disputes that decided the applicant was over 18.