Some areas within the UK experience higher levels of migration than others. London has the highest share of foreign born people in its population, while the North East has the lowest 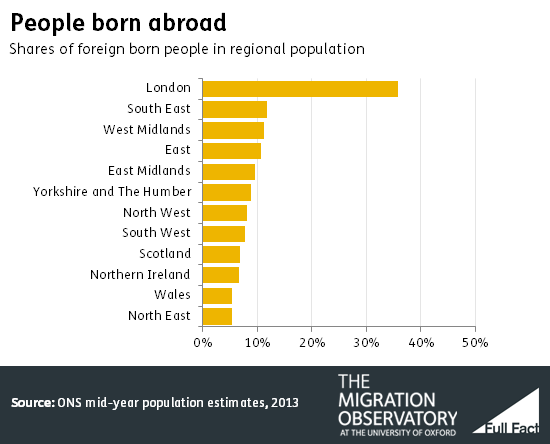 Some local authorities, by contrast, have very low levels of migration. In Redcar and Cleveland in North Yorkshire, for example, foreign born people made up just 2% of the population.

Looking at more recent trends, increases in the foreign born population during the 2000s varied regionally, too

Yorkshire and Humber and the East Midlands regions experienced the highest percentage increases in their non-UK born population between 2001 and 2011, both increasing by 78%. 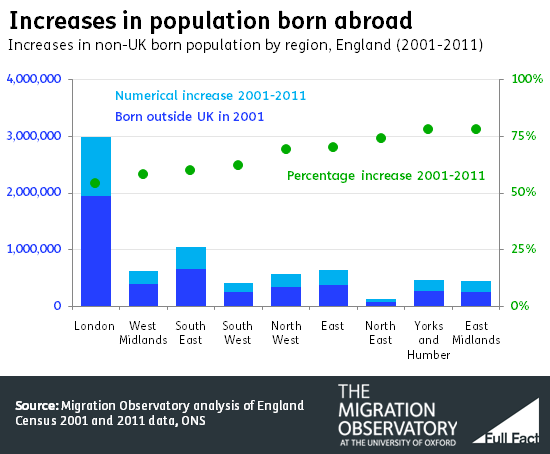 The most comprehensive review of the impacts of migration on services was conducted by the Migration Advisory Committee in 2012. It pointed to serious difficulties in accurately measuring the effects of migration on the availability and quality of public services.

A major reason for this is the lack of information on the nationality or country of birth of people who use public services. Some general observations are possible, however. 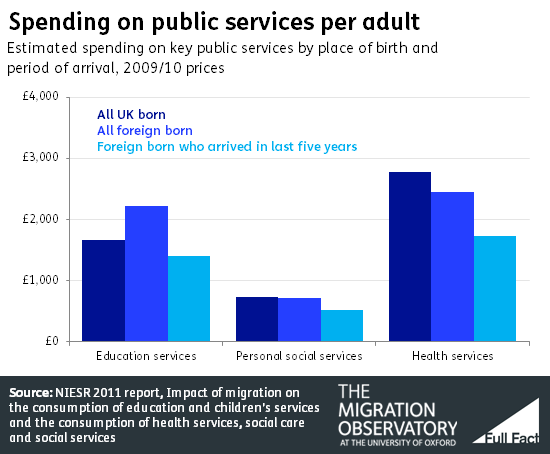 The impacts of migration on public services may depend on the extent to which providers are willing and able to adjust to increases in demand. For example, local authorities and the national government undertake detailed planning exercises to ensure that there are sufficient school places available for the number of students.

By contrast, the stock of social housing has not grown with the rising population, but has fallen over time. As a result, migration may affect UK-born applicants' access to social housing, even though foreign born people rely on this type of housing less than demographically similar UK born residents.

A recent study estimated that two thirds of the decline since 1992 in UK-born households' probability of living in social housing is due to falling numbers of social housing units, while increased demand due to immigration and changes in allocation rules affecting immigrants explained the other third.

Impacts on public services are also likely to vary by region and local authority, although there is little evidence on this kind of variation.

Second, migrants contribute to the provision of public services in two main ways: by paying taxes that contribute to funding these services; and as workers involved in their provision.

Finally, we cannot say with certainty what the impacts of migration on the quality of public services are. In education, for example, some local areas have significant numbers of students with English as an additional language (EAL).

The share of students who were "known or believed" to have a first language other than English was 18% in state-funded primary pupils and 14% in secondary schools, according to the January 2013 School Census. In London, the shares were 47.5% at primary and 38.9% at secondary. However, having a higher share of EAL students does not appear to reduce student attainment, the main indicator of the quality of education.

This briefing was written by Madeleine Sumption and Yvonni Markaki of the Migration Observatory in collaboration with Full Fact. Thanks to Jackline Wahba and Martin Ruhs for comments. This work has been funded by the Nuffield Foundation but the content is the responsibility of the authors and of Full Fact, and not of the Nuffield Foundation.