The net migration target and the 2017 election

This commentary was written and first published by Migration Observatory, which is based at the University of Oxford, and provides impartial, independent, authoritative, evidence-based analysis of data on migration and migrants in the UK. The commentary that follows has been produced independently of Full Fact.

There has been speculation about whether the policy will appear in the 2017 Conservative manifesto and under what conditions. The net migration target – which was originally due to be hit by 2015 – has remained in place under Theresa May’s leadership so far, though with less clarity about the anticipated date for achievement. Dropping the target would be a major change in the principal objective of migration policy in the country. Keeping the target would imply committing to a policy goal which is not feasible in the short term and hard to achieve in the longer term. Labour, the Liberal Democrats and the SNP have all being critical of the net migration target, while UKIP has criticised the Government for its failure to achieve the target.

This article explains what we know about net migration to and from the UK, the policies introduced to reduce net migration since 2010 and the reasons for which the target has not been met.

What is net migration and how well is it measured?

Net migration is the difference between the number of people who move to the UK for a year or more, and the number who leave to live elsewhere for the same period. It includes British nationals and foreign nationals, moving into and out of the UK for work, study, family and asylum reasons, among others. In essence, it is a measure of the direct effect of migration on the size of the country’s population. Positive net migration means that more people enter the country than leave – adding to the population – and negative net migration means that more leave than arrive – reducing the population.

The International Passenger Survey (IPS) is used to calculate the level of immigration to and emigration from the UK, as well as the net migration figure. The survey is conducted by staff of the Office for National Statistics (ONS) who interview people arriving and leaving from airports, ferry terminals and other points of access to the UK. The ONS interviews between 700,000 and 800,000 people every year, from the total of about 100 million people who cross the UK border. Less than one percent of the interviewees – some 5,000 – are migrating to or from the UK. The ONS then extrapolates from this 5,000 sample of people, to estimate how many people in total are moving to and from the UK, where they come from, and what they are planning to do in the UK.

The ONS has reported that official estimates have underestimated net migration in the past. When David Cameron became Prime Minister in 2010, the latest provisional number for annual net-migration to the UK was 147,000 (year to June 2009). The final estimate for that period was 166,000. However, the 2011 census showed that about half a million more foreign-born people lived in the UK than had previously been estimated. This led the ONS to revise up their figures, and it is now estimated that in the year to June 2009 net migration stood at 205,000, much higher than the level originally reported in 2010.

The estimates become less reliable when broken down by group, such as the number coming to the UK for a given reason. In fact, we do not have good data on the effect of each migration route on net migration and this creates difficulties for policy discussions. For instance, recently there have been calls to take students out of the net migration statistics and/or the net migration target. A major difficulty with this proposal is that there is no reliable information on the contribution of international students to net migration.

What policies have been introduced to reduce net migration?

Some of the key policies introduced to achieve the net migration target include:

How has net migration changed over time?

This graph shows how net migration has fluctuated since 1991. As explained above, these numbers have been adjusted over time by the ONS. 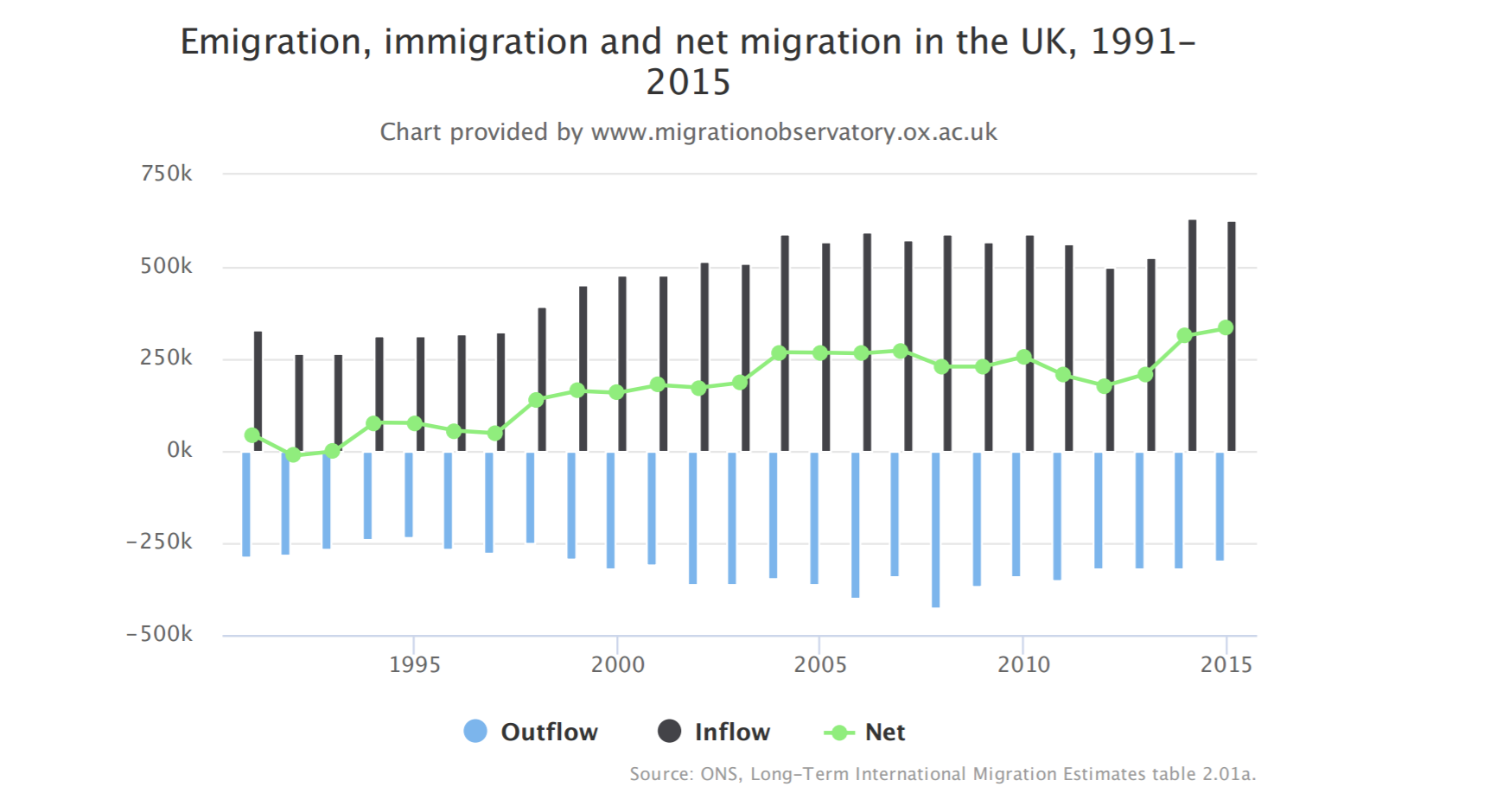 After the 2010 election of the Conservative/Liberal Democrat coalition government, net migration declined from 256,000 in 2010 to 177,000 in 2012. However, the reductions were short-lived and net migration started to increase again – rising to nearly 210,000 in 2013 and continuing to grow sharply.

Recent provisional data suggests that net migration has fallen to 273,000 for the year to September 2016.

Why has the net migration target proved so hard to meet?

A number of factors have meant that net migration has remained considerably higher than the “tens of thousands” target.

This might change after Brexit if – as expected – the UK Government imposes additional restrictions on EU migration.  However, it is important to note that, everything else constant, if Brexit halves EU net migration to 82,500 it would still be the case that net migration is way above the target (that is, total net migration would be around 191,000).

Getting rid of the net migration target is a difficult political decision. Net migration has become the way in which the success or failure of policies which intend to control migration are measured. On the other hand, keeping the migration target means committing to a policy goal which is not feasible in the short term and difficult to achieve in the long-term.

Of course, the target is not a black and white choice. It could be possible, for instance, to adopt a modified version of the target which excludes certain groups (for example, international students). However, this would only be feasible with a substantial improvement in the accuracy of net migration estimates by reason for migration.

This article was first published on the website of the Migration Observatory at the University of Oxford.