The number of Romanians and Bulgarians who've come to the UK since the start of 2014 - when certain restrictions on their movement were lifted - is a topic of huge interest across the media.

But we don't know how many have come since then- and we won't fully know (as fully as estimates can provide) for a long time yet.

In the absence of evidence, several parts of the press this morning and over the weekend over-interpreted the latest set of figures, expected later this week:

"Official figures this week are expected to show that at least another 30,000 Bulgarians and Romanians have come to Britain since restrictions on their entry lapsed in January." - Telegraph

"Another 30k here ... Figures out this week from Oxford University's Migration Observatory are set to show an extra 30,000 Bulgarian and Romanian workers were living in the UK in the first quarter of 2014 compared to the same period last year." - Sun

Both these reports and others misunderstand the latest figures, for different reasons.

Migration Observatory not the source

The Sun wrongly attributes the Migration Observatory as the source of the figures expected this week. The figures will come from the Labour Force Survey on Wednesday morning; the Observatory has provided an analysis of previous figures from the same place.

There are suggestions, including in two Telegraph articles, that 30,000 Romanians and Bulgarians are expected to have come to Britain since January this year, when some of the restrictions were lifted. This isn't the case.

The Migration Observatory said the end of transitional controls was "not expected to bring a decrease" in the number of Romanians and Bulgarians in work. In other words, we can expect at least 144,000 Romanian- and Bulgarian-born people to have been in work in the first three months of this year as well as at the end of 2013. 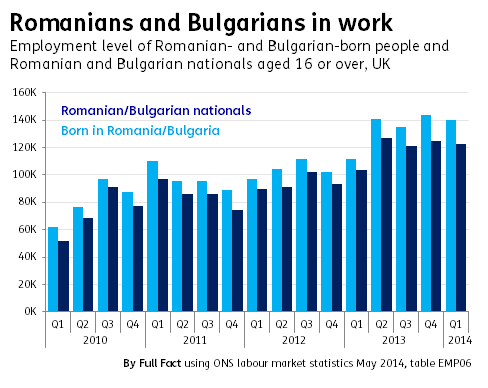 So this week's figures  - which will show employment in the first three months of 2014 - are 'expected' to show at least 30,000 more Romanian- and Bulgarian-born people in work compared to the start of last year.

This obviously tells us almost nothing about the effect of transitional controls being lifted in January 2014: the 30,000 rise happened during last year, there's no way to assign it to the effect of controls having been lifted.

Not necessarily a population change

Because the 30,000 figure is based on Romanian- and Bulgarian-born people in employment, it isn't necessarily a good indicator of overall population change.

As the Office for National Statistics (ONS) has previously set out, these figures only tell us how many are in work, not when they arrived. It's perfectly possible for that some of those who entered the labour market in 2013 had been living in the UK for some time before that.

The Migration Observatory points out that the same figures can be used to estimate the working age population change (using the employment 'rate' of the so-called 'A2' migrants, which has an implicit population estimate), but these aren't as reliable as annual estimates which come much later.

We need figures from the International Passenger Survey to tell us about arrivals, and ONS annual population estimates to give us better figures about population change. Those figures won't be out till August this year and August 2015 at the earliest.

As the Migration Observatory itself noted last year: we have to wait for the facts before we can evaluate the impact of lifting the transitional controls on Romanian and Bulgarian immigration. They're not here yet.

The latest employment figures have now been released. They show the number of Romanian- and Bulgarian-born people in employment was 140,000 at the start of 2014, up 28,000 on the previous year. This still says very little about the effect of transitional controls being lifted in January.

It's possible to compare this total to the last quarter of 2013 to get a better idea, although this isn't ideal. The ONS confirmed to Full Fact today that there's a seasonal element to the data, so it's better to compare year-on-year rather than between quarters. For this data, however, the seasonal effect is expected to be less significant, so it's not entirely unreasonable to do so.

Even so, employment for Romanian- and Bulgarian- born people is shown to have fallen by 4,000 since the end of 2013, and employment by nationality also fell slightly by 3,000. The bigger picture is one of little change in the employment levels over the last four quarters.

As stated above, this data alone doesn't say how much of the employment changes are due to population changes. We'll have to wait for more detailed data to become available from the ONS before finding out more.