What even is 'normality' for annual net migration?

Nigel Farage ended the UKIP manifesto launch with this claim. In recent weeks, this has become a staple for the UKIP leader in one form or another, harking back to an age of 'normality':

Throughout that period, annual net migration rose and fell in different years. So while an average can be produced, to state that it's typical for any one year simplifies this detail. There's also substantial uncertainty in annual net migration figures, as we've pointed out before.

The accuracy of this claim depends on whether you're looking at migration from the 1950s and now, or from then until the end of 'normality'—by Mr Farage's reckoning—around the turn of the century. Between 1951 and 2001, average annual net migration was 7,800, according to census data.

So if anything, Mr Farage overstates historical levels of net migration for the 'normal' period. 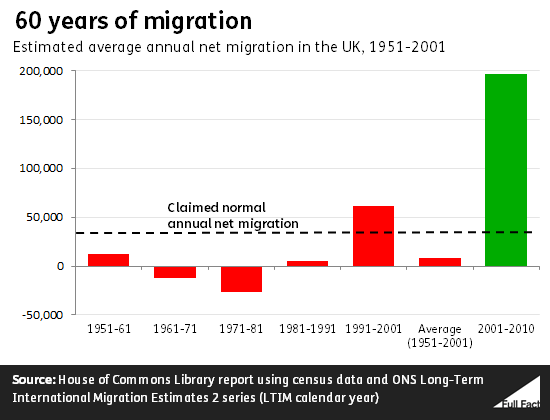 But if we go beyond Mr Farage's described period of 'normality' to include 2001-2010, the average jumps to almost 40,000 and goes some way to clarifying where the UKIP leader is getting his claim from.

Mr Farage's comments oversimplify the history of immigration to the UK, which has varied a lot. For further details about migration, see our briefing on the subject.