Where are the UK's refugees?

More than 80% of UK councils have failed to take in any refugees since 2015.

Correct in terms of the flagship scheme for resettling Syrian refugees, although the figures don’t cover the past four months. Many more councils have accepted asylum seekers through the regular asylum system.

“More than 80 per cent of councils – including many in affluent middle class areas represented by senior Cabinet ministers - have failed to take a single refugee since Britain opened its doors last year, a report has found.”

“On councils' role in resettlement, David Simmonds, of the Local Government Association, described the report as ‘out of date’”.

A report by MPs on the migration crisis in Europe correctly reports the available statistics on which councils have accepted Syrian refugees under a government resettlement scheme.

But as the latest of those statistics only go up to March 2016, it’s fair to raise doubts about whether they reflect the picture now. In addition, councils may have Syrian asylum seekers in their area through the regular asylum system.

The wide-ranging report was published today by the Home Affairs Select Committee, made up of MPs from different political parties. It welcomes the government’s commitment to resettling 20,000 Syrian refugees in the UK by 2020, but expressed concern about “a two-tier system among local authorities, with some providing support to Syrian refugees and others not doing so”.

Councils don’t have to take part in this government initiative, known as the Syrian Vulnerable Person Resettlement scheme.

It’s aimed at particularly vulnerable groups, such as “women and girls at risk” and “survivors of violence and/or torture”.

71 councils did accept Syrian refugees under the scheme between October 2015 and March 2016, while 320 councils didn’t. As the Telegraph reports, that’s over 80%. 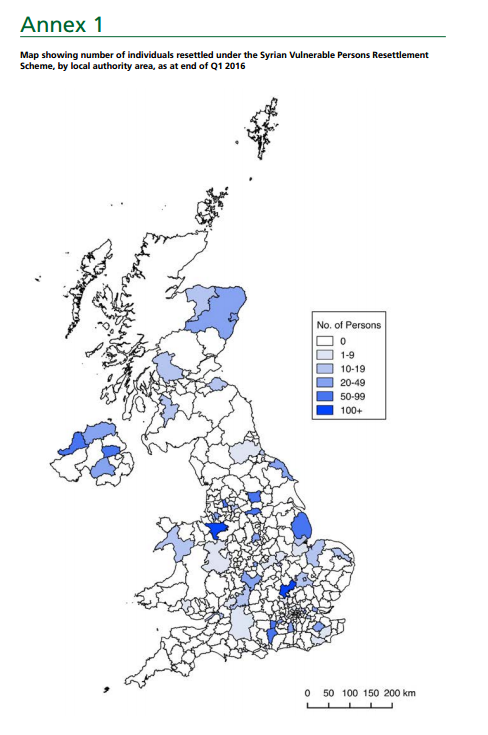 1,600 people have been resettled across those 71 councils. But as the MPs’ report notes, another 250 people were resettled before October 2015. There’s no data on where they ended up.

Nor do we know what’s happened from April 2016 onward, and won’t until the statistics are updated on 24 August.

We could also consider people who have applied for refugee status through the normal asylum process, rather than being brought to the UK under the Vulnerable Person Resettlement Scheme. Regular asylum applications have to be made in the UK.

This ‘Section 95 support’ is more limited than the support available to Syrians accepted under the Vulnerable Person Resettlement Scheme.

There are figures on how many are receiving Section 95 support in different councils. These can’t be broken down by nationality, although we do know that UK-wide there were around 1,300 Syrians as of March 2016.

The number of councils hosting or providing allowances to asylum seekers of all nationalities was over 200.

Combined with those who have so far taken in Syrians under the Vulnerable Person Resettlement Scheme, the proportion of councils with no refugees or asylum seekers at all according to these statistics falls to 40%.

The Home Affairs Committee has previously reported on some councils seeming reluctant to accept asylum seekers.

Looking at the big picture, the number of Syrian refugees and asylum seekers in the UK is approaching 10,000.

On top of the 1,900 recorded as having resettled up to March 2016, there have been 8,000 asylum applications from Syrians through the regular system since the conflict there began in 2011. The vast majority have been and will be accepted.

There are 4.8 million Syrian refugees, according to the United Nations.