On existing trends, it will take 50 years for 50% of Queen’s Counsel to be female.

This is based on the change over the last year, but that doesn’t tell us much about what exactly will happen over 50. That said, the essence of the point is correct: gender parity is a long way off.

More female and black and minority ethnic lawyers were appointed to the senior rank of Queen’s Counsel in 2016/17 than ever before.

Correct, if you add both groups together. Looking at each category individually, there have been more female, and more black and ethnic minority, QCs appointed in previous years.

“More female and black and minority ethnic candidates have been appointed Queen’s Counsel than ever before.”

This headline is correct, but the trend toward more female and ethnic minority appointments to the top rank of the bar is uneven.

Queen’s Counsel (QC) is a rank awarded to barristers who are “considered as experts in their field”, as the Bar Standards Board puts it. They generally have a minimum of 15 years' experience. Around 10% of the 17,000 barristers in England and Wales are QCs.

In 2016/17, 31 women were successful in their application for QC status, out of 113 in total. There were also 16 new QCs from black and minority ethnic backgrounds.

That’s not a record in either category. But it is a record when you add them together. In other words, the number of new QCs who were either female or from a black and ethnic minority background was at its highest ever (ignoring any overlap between the two categories).

And there were new records set in each category when you look at the percentages of successful applicants, rather than the absolute numbers. That said, there have been fluctuations within the upward trend. 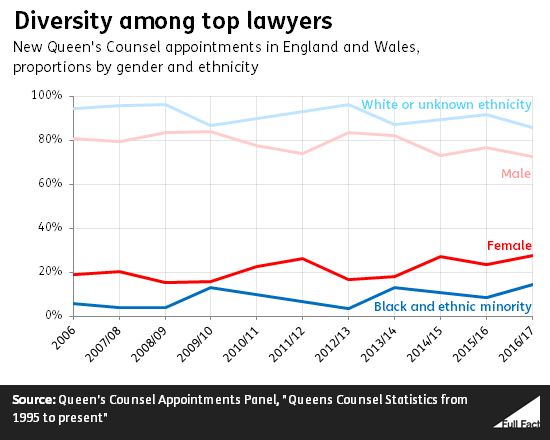 Professor Richard Moorhead, who has also written about this, says that “the most important lessons from the data are probably learnt from the number of applicants and their success rates”.

In 2016/17, around one in five applicants for QC status was female, and one in seven from an ethnic minority. Female candidates were more likely than men to be appointed, and ethnic minority candidates roughly the same as white candidates (although this hasn’t always been the case).

Professor Moorhead notes that the move toward gender parity at the top levels of the bar is taking time, something also highlighted in today’s headlines:

A report released on 27 January by the Bar Standards Board, a regulator, show that 13.7% of all QCs are female. This is up from 13% in 2015, so the report’s authors comment that at this rate, it would take over 50 years for the proportion of female QCs to reach 50%.

Taking the trend from a single year doesn’t necessarily tell us much about what might happen 50 or even 100 years into the future. But the needle has hardly budged over the six years we have data from the Board. 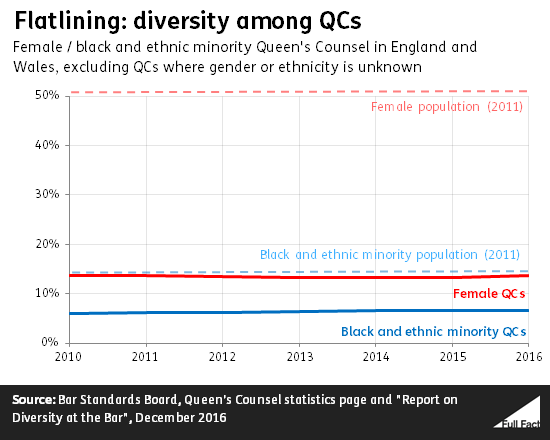 In fact, there are fewer female QCs now than there were in 2010. The percentage has held up because the total number of QCs has dropped as well.

Non-QC barristers are a lot closer to being representative than the most senior ranks of the profession. Around 39% of non-QCs are female, and over 50% of ‘pupil’ (trainee) barristers.

Similarly, the level of ethnic minority representation across all barristers is just below that in the general population.

The Bar Standards Board suggests that “the barriers faced by women and BME barristers primarily relate to retention and progression within the profession”.

The number of female and ethnic minority QCs is considered important for making judges more diverse, as many of the latter are drawn from the ranks of the former.

In the graph labelled "Diversity among top lawyers", two of the lines were mislabelled. The "male" label was attached to the data showing "white or unknown ethnicity", and vice versa. That has been corrected in the updated graph.