The end of holiday fines?

These two councils had the highest percentage of authorised term-time holidays in England for 2014/15. There are big differences between councils.

“The case of a father who successfully challenged a conviction for taking his daughter on holiday during school term-time will be heard in the highest court in the land… in the last year, many councils have relaxed their fines policy, as they wait for the conclusion of this case.”

“Torbay in Devon is the best place to live if you want to take secondary school children away during the term, with 51 per cent of all term time holidays given official approval. For primary age children, North Yorkshire gets the best deal".

In April 2015, Jon Platt took his daughter on holiday to Disney World in Florida and ended up in court.

Magistrates on the Isle of Wight decided in October 2015 that Mr Platt wasn’t guilty of a criminal offence for taking his daughter out of school for the holiday.

Isle of Wight Council had tried to prosecute Mr Platt for failing to ensure that his child attended school “regularly”. He refused to pay the fine that would have kept the matter out of court.

A victory for Mr Platt would call into question schools’ powers to fine parents for taking their child on a term-time holiday. The Department for Education says that these “penalty notices” can be handed out even for “one-off instances of irregular attendance such as holidays taken during term time without the school’s permission”.

But these fines are an alternative to prosecution if a child fails to attend school “regularly”. If a parent hasn’t committed that crime, it’s hard to see how they can be asked to pay a fine to avoid prosecution for it.

Granted, new regulations in 2013 stopped head teachers from being able to authorise term-time holidays for up to two weeks. Ministers were concerned that these holidays were being seen as a right rather than a privilege.

But as the High Court said in Mr Platt’s case, the new regulations don’t change the law. The legislation allowing for fines and prosecutions is about ensuring “regular” attendance—it says nothing about one-off or occasional absences like a term-time holiday.

If the Supreme Court agrees, the government will have to pass new legislation to allow fines or prosecutions for one-off holidays.

Have councils been issuing fewer fines while they wait to hear the outcome of the case?

The use of these fines almost quadrupled in the four years ending in 2014/15. That’s the most recent official data, so statistics don’t allow us to say for sure whether there has been a ‘Platt effect’ since late 2016.

The BBC says that 35 councils have “changed their policy” since Mr Platt’s High Court win in May 2016, based on feedback from 108 town halls. However, the story is a little cagey: it doesn’t actually say that all, or indeed any, of these councils have stopped issuing fines altogether.

It does say that “28 have withdrawn fines issued to parents”, but individual fines are withdrawn all the time—that’s different from calling a halt to fines across the board.

Mr Platt himself has been sending Freedom of Information requests to councils to see whether they’ve changed their approach off the back of his case, and publishing the results. Some councils have changed their ways, such as Cambridgeshire:

“From Monday 16th May 2016 when we receive any referrals from schools for a Penalty Notice for a holiday alone to be issued, we will only issue a PN for holiday absences where there are other unauthorised absences which take the attendance percentage below 90%”.

On the other hand, Durham County Council said that it hadn’t changed anything, and issued more fines in the summer of 2016 than the year before.

You should be able to find your council’s policy on fines for school absence on its website or by asking for it. It may be referred to as a “Fixed Penalty Notice” or “Truancy Penalty Notice” policy.

As the Mail highlights, it’s also possible to find out which councils’ schools were most likely to approve a term-time holiday as recently as 2014/15. That year, around one in five term-time holidays were authorised nationwide, for both primary and secondary schools. But there are big local differences. 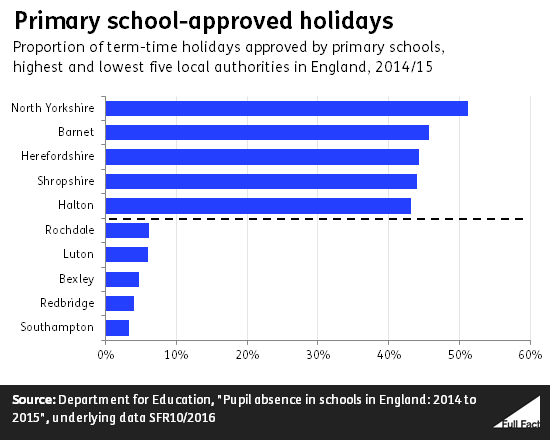 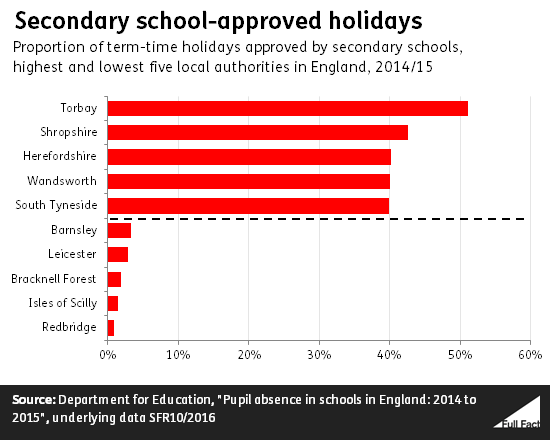