Many judges at the European Court of Human Rights aren't legally qualified, and are appointed politically.

None of the judges at the Court are obviously unqualified based on their CVs, although they are voted in by a political body.

"The European Court of Human Rights is no more than a joke. It is full of judges, many of whom are not even legally qualified—they are not actually real judges; they are pseudo-judges—who are political appointees from the member states who have been sent to make political decisions, not legal decisions"—Philip Davies MP, 28 May 2015

While none of the current judges at the European Court of Human Rights are obviously unqualified, they are in a sense political appointees, and concerns have been expressed in the past about the system for electing them.

The system for electing judges: criticised in the past

Each of the 47 member states of the Council of Europe (which is different from the EU) nominates three people, who are then assessed and voted on by the Parliamentary Assembly of politicians from each country. The UK sends MPs and members of the House of Lords to this body.

There have been concerns about this process, and the quality of the nominees in particular, in the past. A 2003 report concluded that "even in the most established democracies, nomination often rewards political loyalty more than merit".

The Council of Europe says it's tightened up the system in response to these concerns. It now gives countries advice on putting together a shortlist that's up to scratch, and if it isn't, can ask countries to submit a new list.

The results of electing judges: nobody who looks out of place

Looking at the biographies of the current judges at the Court, there's nothing to suggest that they're fundamentally unqualified to do the job. 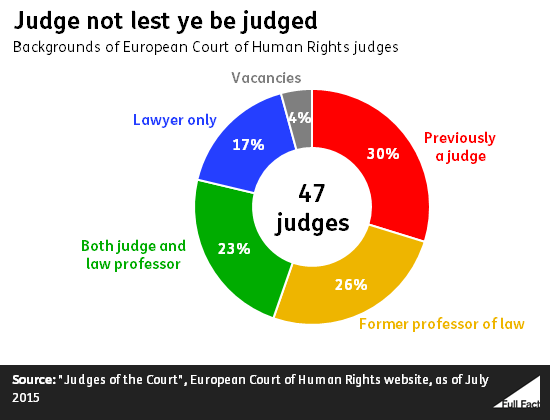 The 17% (8 out of 47) judges who didn't previously hold the title of "judge" or "professor" aren't obviously out of their depth. The judge from Albania, for example, was a practicing lawyer, lecturer and legal advisor to various senior politicians, according to his profile on the Court's website.

Judges at the Court are supposed to "possess the qualifications required for appointment to high judicial office or be jurisconsults [experts in law] of recognised competence", according to the European Convention on Human Rights.

The business of "jurisconsults" isn't something we're used to in the UK, where judges have almost always been drawn from the ranks of senior barristers (or advocates, in Scotland). Lady Hale, a Supreme Court judge, was "the first to have made her career as an academic and public servant rather than a practising barrister" when she was appointed to the High Court in 1994, according to her official biography—and even she did work as a barrister at one point.

In other countries, there isn't the same expectation that judges will practice law first. Some spend their career on the bench; others might become a judge after working for the government, or as an academic. This is reflected in the make-up of other international courts, such as the UN International Court of Justice and the EU Court of Justice.